“How did we get where we are right now?” A Conversation with Todd Cochran (Part 2)

Bill Kopp: I didn’t realize that hybrid had happened! There was an album that came out about five, six years ago called Miles From India. But I had no idea such a thing had been explored that far back.

TC: Yeah. John Handy, who had been in Charlie Mingus‘ band, was really a very special player. He played all over the world, and he taught for a time at San Francisco State University. I played with John for about a year and a half. I worked with Woody Shaw; I played with Joe Henderson briefly. I kind of circled Blue Note, but it never “happened.” I ended up producing Freddie Hubbard for Blue Note many years later; I wrote an album for him called Times are Changing.

I’ll give you one little insight here. That record I wrote for Bobby Hutcherson, Head On, was produced by George Butler; Butler went on to be a very powerful A&R guy at Columbia. He was Miles Davis‘ A&R guy, and he also signed Wynton Marsalis. I did a lot of projects with George Butler with CBS/Sony. And it was really something I learned way down the road that Head On was the first record that he had produced!

But yes, to answer your question, Blue Note would have really changed my trajectory. It had a lot to do with the fact that I was in San Francisco. I learned my art there, and I’m very happy to have grown up in that environment. Again, it was about the balance of cultures. Haight-Ashbury, the free speech movement coming out of Berkeley, City Lights Bookstore, the American Conservatory Theater. It was the beginning of a lot of what we’re experiencing now: gay rights and such. It was all there. It was a place for ideas. And everyone was interacting with each other, because it’s a much smaller city, geographically, than, say, Los Angeles.

BK: I hadn’t really thought about the way that a city’s geography can affect its musical character…

TC: Absolutely. Very much so. In San Francisco, The Grateful Dead were playing. The [Jefferson] Airplane. There was Bill Graham, David Rubinson. So much energy. I would say that it was the centerpiece of the American cultural revolution. Forward-thinking ideas were driven by the intellectual community. And there was money there, too. And the money went into these great academic places, so this place that was rich with ideas meant that everyone could have their curiosities satisfied.

But a lot of people felt completely put off by it; it was too intense. People don’t realize just how much came out of that scene. Cal Tjader was there. Dave Brubeck came out of that.

TC: Vince Guaraldi came out of that too. And Duke Ellington did his spiritual concerts there, at Grace Cathedral in San Francisco. Cornel West had a series that he toured with, with Rabbi Lerner; that was a great, powerful dialog. Everything was there for the taking.

BK: Your wah-wah work on the Hohner Clavinet D6 is a highlight of “Free Angela.”

TC: You must be a keyboard player…

BK: Yes, I am. The vocal chants add a great texture, more musical than lyrical to my ears. I know that there’s a point to what’s being sung, but I hear those vocal lines as a purely musical component. When you composed the track, was the idea of employing the wah-wah pedal – because you’re really pumping it – so prominently part of the original idea, or did it develop in the studio?

TC: I was fascinated by the guitar. I always loved guitar. I’m a pianist, and I come from the classical world. But people were doing such amazing things with that instrument, and then they figured out how to modify the sound electronically. And I’m sure it was some great accident of mis-wiring, but then they created this pedal where you could control the variations in that signal. And it became a complete sound experience. I liked that it gave me the opportunity to get close to what I loved about what guitarists were doing. It’s a bit like what people were doing with brass instruments, using a plunger or other hand mutes. So it became a sort of vernacular expression. You could do it rhythmically, or you could just slowly adjust it. A closed sound would be like the downbeat, and the open sound on two and four would be like the backbeat.

Another thing that I was just learning it that when it was amplified, when you’re in the proximity of the amplifier, you could actually sustain sounds. Feed back sounds. That’s something I explored a bit down the road. But it was a lot of fun.

BK: Worlds Around the Sun is wonderfully difficult to classify. There’s out-there avant jazz, soul, funk, rock texture, pop melodies. There’s something for everyone. You were only 20 when you made the record; what were your thoughts going into the sessions? Did you want to make a record that explored your interests and abilities, to have commercial success, or just to best deliver the set of songs you had written? 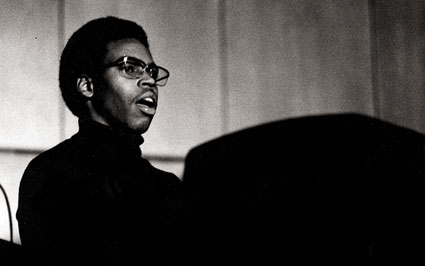 TC: All of the above. It was really important to me to be authentic musically. I enjoyed so many musicians, and been inspired by so many great players. I played the Hohner Clavinet with Herbie Hancock on a film called The Spook Who Sat Behind the Door. I was really proud of that; Herbie conducted and I played keyboards on the film score. And the film has gone into the National Film Registry as a representation of the period. I was exploring the D6 a lot on that.

And that’s what the film needed to have, to be fully relevant. I came up at a time when folk music was great, and r&b was moving into these wider expressions where it was not just relegated to subjects of love.

TC: The whole range of expression was opening up, particular for African Americans. And commercial success was important, because that allowed you to be able to go out and play your music. Commercialism was perhaps secondary, as the idea was to make a connection with an audience.

The songs themselves on Worlds Around the Sun had a thematic conceptual approach. Songs like “It Ain’t” were about looking at certain mythologies. The light was shining much more brightly than it had previously; the main commitment was to playing the music as well as it could be played. And the desire to communicate was very, very important. There was music being made at that time that was very technical. It may have been brilliant, but it was not necessarily inclusive; it didn’t invite you in. You might see musicians playing, and you’d be taken in by this mighty relationship they had with their instrument, whereas my interest was to make music or art that was inclusive, that brought them into the melodic and thematic dimensions of the music, where it created a space where maybe we could think about an idea, together. That was what was important to me; not a display of brilliance and technique.

BK: A balance between appeals to the head and the heart…