Album Review: The Move — Live at the Fillmore 1969 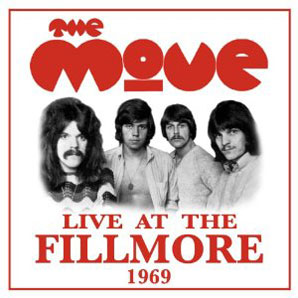 Here’s another case of a long-circulating bootleg finding official release (see also: yesterday’s review of an Iron Butterfly live set). The Move were big in the UK, but went largely unknown in America. At least, that is, until they shifted personnel a bit and rebranded themselves as Electric Light Orchestra.

The band certainly knew all about America, though. Many years before its inclusion on Lenny Kaye‘s influential Nuggets compilation, The Nazz‘s “Open My Eyes” was a staple of The Move’s live set. Though the group had an impressive string of hit singles, on this night in 1969 at San Francisco’s Fillmore, they chose to open with a tune released two years earlier (to no great sales) by the Philadelphia group featuring a very young Todd Rundgren. The Move’s excellent live version does overextend the excellent tune just a bit, however.

On this recording – sourced from low-generation copies of that circulating tape* and/or subjected to some expert sound clean-up – The Move turns in exciting covers of Tom Paxton (“Last Thing on My Mind”) and relatively obscure art-prog group Ars Nova (“Fields of People,” included on The Move’s 1969 Shazam LP). The Carole King and Gerry Goffin tune “Goin’ Back” gets The Move treatment as well. The sound isn’t quite up to standard release quality on this 2CD set, but the music is good and important enough to give the audio quality a pass.

The band were big fans of American rock: their sets often included The Byrds‘ “So You Want to Be a Rock’n’Roll Star” and Moby Grape‘s “Hey Grandma,” though neither were performed on this Fillmore date. Rick Price‘s super-heavy bass lines and Bev Bevan‘s drums presage the approach used by Black Sabbath, but Carl Wayne‘s lead vocal plus Roy Wood‘s keen harmony vocals add a pop sensibility that leavens the heaviness. “Cherry Blossom Clinic Revisited” is perhaps the best example of all of the Move’s strengths in a single tune: gentle guitar parts, a capella vocal harmonies, and thunderous backbeat; the song’s suite-like character may remind some listeners of The Who‘s “A Quick One (While He’s Away).” They also manage a clever juxtaposition of a classical theme (you’ll recognize it) into the tune, before doing such things was (for a time) a de rigeuer part of rock performance. The Move manage to convey power and subtlety onstage without the use of keyboards or acoustic guitar.

The Move’s set closes as it began, with another Nazz cover: this time it’s “Under the Ice,” from Rundgren’s group’s then-current Nazz Nazz LP. The tapes as circulated among collectors purported to document a set from October 1969. As presented on this official set, the recording features additional performances of “Don’t Make My Baby Blue, “Cherry Blossom Clinic Revisited” and “The Last Thing on My Mind,” plus a contemporary recording – more than ten minutes in length – in which drummer Bevan recalls the ’69 tour.

Completists note: If you have the bootleg version of this tape, you might want to hold onto it: most copies include a live version of The Move’s Tchaikovsky-meets-psychpop classic, “Night of Fear” that’s not found on this new official set.

Live at the Fillmore 1969 is highly recommended to anyone who appreciates late 60s hard rock, British variant, done with a deft combination of panache and excessive volume.

* A quote in the liner notes suggests that vocalist Carl Wayne was in possession of the original tapes.