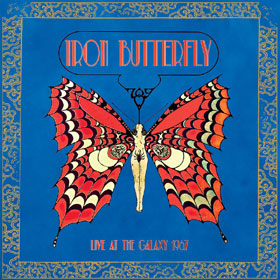 There’s been a spate of previously-unreleased live albums released of late; this week I’m focusing on five of them. The first, a 1975 set by Magma, offered way-out music and excellent sonic quality. The second, a 1980 Captain Beefheart set, showcased equally strange (but quite different) music in terrible audio quality. Today’s entry features much more accessible music, from psychedelic -era heroes Iron Butterfly, in sound quality that falls somewhere in between the previous two.

In 1967 Iron Butterfly were still several months away from recording and releasing their classic “In-a-gadda-da-vida,” so listeners who give Live at the Galaxy 1967 a spin won’t hear that tune. What they’ll find instead is a club gig heavy (ha) on tracks from the band’s debut LP Heavy which hadn’t even been recorded at the time of this set.

In addition to the hypnotic “Possession” (featuring Doug Ingle‘s husky vocalizations atop a lockstep riff that is equal parts his Vox organ and Danny Weis‘ fuzztone lead guitar), perennial closer “Iron Butterfly Theme” and “Gentle As it May Seem,” the set offers up a few standards along with some tracks that wouldn’t surface until the band’s third LP Ball (the excellent “Filled With Fear,” “Lonely Boy”). The lineup that is documented on this set wouldn’t remain together long enough to tour behind their debut album; buy that point in the band’s lifespan, Ingle had recruited new players to join him and drummer Ron Bushy.

Live at the Galaxy 1967 seems to be a soundboard recording (albeit an nth generation dub of one); between tracks, when Ingle addresses the crowd, his voice is clear and distinct. But when the band all launches in (this seems to have been an extremely loud performance at the band’s regular Hollywood hangout), Ingle’s vocals are largely obscured by the instruments. His Vox survives the onslaught, however: his simple but effective keyboard riffage rises above the thunder of the bass, guitars and cymbal-heavy drumming. The recording has circulated for years among bootleg collector circles; I’ve had a copy going all the way back to the days when we traded cassette dubs. It’s likely that this official release was sourced from one of those unknown-generation tapes.

Iron Butterfly’s music has often been described as riffs in search of songs: as exemplified on this recording, the band often hit its mark. While the vocals can’t easily be followed, the tunes never meander; built around solid and memorable riffs and allowing space for effective solos, tracks like “It’s Up to You” (a good tune they’d never release) make their point in rather economical fashion. Ingle introduces “Gloomy Day to Remember” (which is quite reminiscent of The Blues Magoos) as another of the band’s original tunes; it, too has gone unreleased in any form until now.

As a document of the band’s earliest incarnation, replete with songs you won’t hear anywhere else, Live at the Galaxy 1967 is recommended to fans of the band as well as to fans of that particular brand of 60s psych that bridges the gap between heavy and poppy.