EP Review: The Fauntleroys — Below the Pink Pony 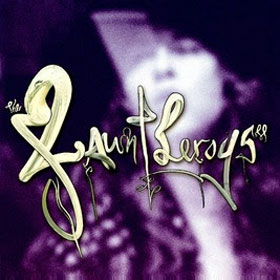 I can’t find the specific quote I’m looking for at the moment, but there’s an entry in Lillian Roxon’s Rock Encyclopedia (the original 1969 edition, not the lousy and lifeless early 70s update edited by Ed Naha) in which the author predicts the rise of one-off collaborations between established music. Again, I can only paraphrase, but Lillian Roxon cites the artistic freedom inherent in such temporary musical unions.

The whole concept didn’t catch on in rock to quite the degree Roxon predicted (though it was and remains a fundamental principle in jazz, where “groups” often assemble for a single project and then dissolve and move on). But when it does happen, the results can be impressive, and do fall in line with Roxon’s predictions.

The Fauntleroys are the latest example of an ad-hoc group made up of established artists. This alt-rock supergroup (there, I’ve said it) features Alejandro Escovedo (The Nuns, Rank and File, substantial solo work), Ivan Julian (Richard Hell and the Voidoids, excellent solo work, and production for such greats as Richard Barone and The Fleshtones), Linda Pitmon (Miracle 3, The Baseball Project) and Nicholas Tremulis* (Candy Golde, and yet more stellar solo work), all coming together to record and release the six-song EP Below the Pink Pony.

Each of the quartet’s straightforward melodies comes wrapped inside a slashing, barbed-wire arrangement that conveys danger, and a sort of elegant scuzziness, a streetwise beauty that will feel familiar to fans of these players’ back catalogs. Their collaborative approach to songwriting – working from snippets and building the tracks in Julian’s NYC studio – means that the songs have the fingerprints of all four members on them, rather than sounding like the work of one member backed by three others. Below the Pink Pony is, then, the antithesis of something like The Beatles’ white album.

That said, Tremulis’ powerful and commanding lead vocals gives him what sounds like a slightly larger role in the finished product. Pitmon’s backing vocal on “(This Can’t Be) Julie’s Song” and others balances things out a bit, though. Julian’s snaky guitar slashes and Escovedo’s distorted, buzzing guitar work mesh together to convey a sense of peril, even when the lyrics lean (slightly) toward the positive and uplifting.

The production finish on the album is spiky and rough, and one senses that’s exactly as the four musicians hoped it would be. The balance between studio polish and first-take vitality is perfect. And the best news about The Fauntleroys is that – unlike what Roxon described in 1969 – the group has plans to tour and release a full-length album. I’ll be keeping an eye and ear out for that one, as should you.

* I’m still waiting for Tremulis to paint my house as promised (inside joke).