When most modern-day listeners think of Genesis, their thoughts turn to the Phil Collins-fronted trio that released a string of pop albums and singles in the late 1970s and early 80s. Or, to riff on the old Beatles joke, they refer to Genesis as “the band Phil Collins used to be in.” But to those who paid attention in the early 70s, Genesis is, at least, the band Peter Gabriel used to be in. And that Genesis was a highly theatrical outfit, with Gabriel onstage in an assortment of outlandish costumes, introducing the lengthy story-songs in his trademark clipped, back-of-the-throat manner. And Genesis’ albums of that era – most notably, 1973’s Selling England By the Pound – featured musical flights of fancy that capitalized on the instrumental prowess of Tony Banks (keyboards), guitarists Steve Hackett and Mike Rutherford, Gabriel on vocals and flute, and the (too-often forgotten) superb drum work of Phil Collins. 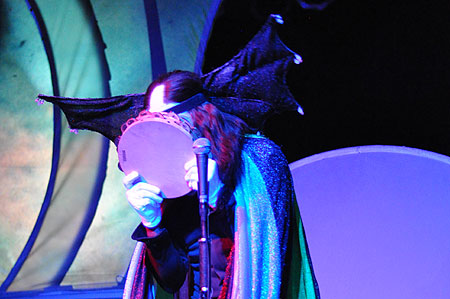 The work of that classic era lineup is treasured among many Genesis fans, and save for a few one-off reunion projects, no new music was released by that configuration after the 1970s. Those who wanted to enjoy the live spectacle that was early-mid Genesis had to content themselves with a Peter Gabriel concert (though Gabriel didn’t and doesn’t perform Genesis era material) or track down one of the handful of unofficially-released films documenting Gabriel-era shows.

One group of people who have most assuredly seen those films is the five-man group calling itself The Musical Box. This Montreal-based quintet formed over twenty years ago with the express mission of bringing that classic-era Genesis back to present-day audiences. The group’s current tour features alternating set lists: one night centers around material from the 1972 album Foxtrot; the next builds a setlist around songs from Selling England By the Pound.

As it happens, the latter is both my favorite Genesis album and the basis for The Musical Box’s July 22 performance at Asheville’s Orange Peel. I scored a front-row seat for the spectacular show, but made a point of not watching any Youtube clips of the group ahead of time; I wanted to be surprised.

Indeed I was surprised, and delightfully so. From the moment we arrived, it was clear that The Musical Box takes great care to faithfully re-create the visual components of an early 70s Genesis show. A pre-concert look at the equipment onstage showed that vintage (or, at the very least, vintage-looking) instruments and amplifiers would be in use wherever possible.

The “Steve Hackett” guitarist (François Gagnon) would be seated on a stool stage-right, with amp controls and pedal at his easy disposal. “Mike Rutherford” (left-handed player Sébastien Lamothe) would, for most of the evening, be sporting a custom Rickenbacker double-neck axe containing both bass and six-string guitar. The drum kit of “Phil Collins” (Marc Laflamme) was large but made use of older, less-substantial hardware, the kind that can tip over when the drums are hit hard. And while there was a concession to modern technology in the form of a digital keyboard (with its nameplate airbrushed matte black), most of the keyboards played by “Tony Banks” (Guillaume Rivard) were the real thing: a Mellotron, an organ with pedals and Leslie cabinet were prominent onstage fixtures.

None of that technical information would mean a thing if the music wasn’t right. And it most certainly was: as the band ran through selections from the early Genesis catalog (not, in fact, playing Selling England start to end, but instead peppering the set with album tracks), the audience was provided with a true Genesis experience.

The single most important component of that experience was vocalist Denis Gagné (“Peter Gabriel,” of course). His purposefully stilted, bird-like onstage demeanor captured the essence of Gabriel’s public persona of the 70s. Making ample and effective use of costume changes, Gagné led the band on a dizzying trip through the early part of the Genesis catalog.

Other than Gagné (who remained firmly in character the entire time), none of the band members addressed the audience during the performance, though all provided backup vocal support. If any of the band have French-Canadian accents, no one in the audience could tell. The fanciful backdrop and occasional projected images helped make the illusion complete.

Little details helped, to be sure: the group’s long history as a tribute band has clearly afforded them the opportunity to hone the presentation to perfection. Laflamme wore a pair of white overalls with no undershirt, just as Collins did onstage in the 70s. And the overall white-clothing theme of the band helped keep visual focus directly on the flamboyant visual spectacle that was Gagné.

A few songs from Selling England By the Pound were left off the night’s setlist (most notably the beautiful, heart-rending Collins spotlight number “More Fool Me”), but it’s difficult to imagine anyone having come away disappointed from an evening that featured the keyboard-centric “Firth of Fifth,” the melodrama of “The Battle of Epping Forest” (both from Selling England) and an encore that included “The Knife,” from Genesis’ 1970 LP Trespass. As it was, the setlist provided each band member ample opportunities to show off (a) their instrumental chops and (b) their skill at re-creating the sound of Genesis studio albums onstage, a feat that even the original band could rarely manage.

For those who saw and loved Genesis with Peter Gabriel, The Musical Box are a vivid present-day re-creation of that era. And for those who are too young to have seen Genesis the first time ’round, this feels like the real thing.