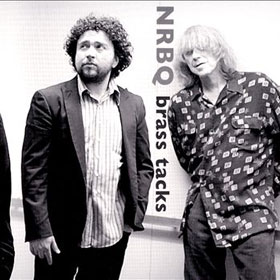 NRBQ are one of America’s great musical treasures. Though they’ve never enjoyed the sort of commercial success of, say, a Creedence Clearwater Revival or The Band, the catalog of this band formed in 1967 is filled with riches that draw from all manner of musical forms. Listeners are as likely to hear shades of cajun swamp pop as they are hints of pianist Terry Adams‘ hero Sun Ra. And though the lineup of NRBQ has changed significantly from the old days (only leader Adams remains from the original lineup), the group’s signature approach to music remains intact.

Wry lyrics are the highlight of many NRBQ tunes, and “Greetings From Delaware” on Brass Tacks, the group’s latest, continues that tradition. Like all the tunes on the disc, “Greetings” sounds as if it was recorded live in the studio. There’s a loose-limbed feel that never feels about to fall apart; it’s the kind of aesthetic that results from a band touring and playing together for a long time, road-testing the tunes and honing them to sharpness before ever setting foot in a studio.

Adams’ assured and stylistically varied piano playing is often the centerpiece of the musical arrangements, but the rest of the band (guitarist Scott Ligon, bassist Casey McDonough, and Conrad Choucron on drums) all shine. Adams’ “Sit in My Lap” feels like a distant cousin to John Lennon‘s “(Just Like”) Starting Over,” minus the retro trappings. McDonald’s “Fightin’ Back” has a pop-country vibe (the good kind), and this lineup of NRBQ gains strength from its drawing upon the songwriting talents of three members.

NRBQ’s approach has always been modest and unassuming; the band’s music doesn’t reach out and grab listeners; instead the tunes are warm, welcoming and inviting: it’s up to to the listener whether to come in or not. The song titles alone give a tidy overview of the concerns dealt with on Brass Tacks: “It’ll Be Alight,” “Love This Love We Got,” and a knowing reading of the Great American Songbook classic “Getting to Know You.” Adams’ harmonica on “I’d Like to Know” sounds and feels like an accordion, and his piano on “Places Far Away” – the disc’s most outré number – sounds as if it’s informed equally by Randy Newman and Sun Ra. “Can’t Wait to Kiss” You” is a delightful singalong in a classic pop vein, and features a brief, ear-candy guitar solo.

Brass Tacks isn’t likely to catapult the band into mega-stardom, but for fans of the band’s friendly and intimate aesthetic, it’s a joy to hear that the band is busy and as vital as ever.