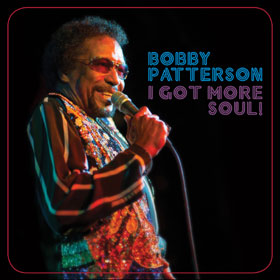 If you happened upon a spin of I Got More Soul!, the new album from Bobby Patterson, you could be forgiven for thinking he’s the latest in young new recording artists playing an authentic 21st century brand of classic southern soul. Patterson name-checks Johnnie Taylor, BB King and other soul/blues/r&b giants in the title track, a funky groove that nails the Stax, Ardent, Muscle Shoals and Hi studio vibes of yore, and the band is in the pocket, providing for each of the ten tracks the sort of backing that fits the songs’ moods perfectly.

The thing is, Bobby Patterson is 70, and I Got More Soul! was cut a nine-hour drive southwest of Memphis, in Austin TX’s Arlyn Studios. And Patterson (who co-produced the album with Zach Ernst of The Relatives, who back Patterson) is a journeyman soulster who released a tasty string of singles in the period 1969-1976 on smallish Jetstar and Paula Records, and cut the now-impossibly-rare It’s Just a Matter of Time LP in 1972.

On I Got More Soul!, Patterson serves up songs that put his voice – an amazingly youthful instrument – right out front. On the deep funk of “Can You Feel Me?” Patterson assumes the persona of a tough-talkin’ dude, not unlike early hip hop vocalists whose tunes were often about how hip they were. And in Patterson’s capable hands and voice, the song leaves no doubt that Patterson truly is the man. Shades of Sly Stone (whose “Poet” gets a knowing reading from Patterson) and Little Willie John are shot through this collection of eight originals and two covers.

Patterson belts it out when he needs to, but he brings it way down low for semi-spoken bits, proving that a skilled and effective vocalist can command attention without having to shout. The funky “It’s Hard to Get Back In” sounds like the best blaxploitation film theme you’ve never heard, a streetwise swagger of a tune with charts that nail the Memphis Horns vibe to the wall.

The album’s no-frills production never calls attention to itself; the sound is clean but never slick, and the band’s rhythm section and the horn players do most of the musical heavy lifting; the keyboards and guitar are subtle and used more sparingly. The net effect of the arrangements is to provide sympathetic backing for the star of the show. On the smoky and alluring “The Entertainer Pt.1,” Patterson tells us he’s in the house while what sounds like the percussion setting on a 70s organ lays down the beat. The tasty electric piano backing behind Patterson’s sung/spoken vocal feels like vintage Donny Hathaway. “I don’t care if you’re on the hood or in the trunk,” Patterson tells us, “Ain’t no way you can get away from my funk.” He truly is The Entertainer. And when Patterson lights a torcher as on the Otis Redding-styled “I Know How It Feels,” you’ll believe that he really does know. And the gospel-flavored “Everybody’s Got a Little Devil in Their Soul” proves that this soul veteran knows how to testify. Open your ears to the deliciously varied I Got More Soul! and Bobby Peterson will make you a believer.