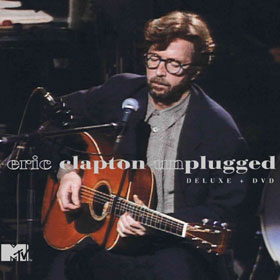 Here’s a slightly unusual candidate for reissue: Eric Clapton‘s 1992 Unplugged album. To my knowledge, this massively commercially successful album has never gone out of print, which begs the question: why reissue it? To be fair, this 2014 reissue does include some bonus material. But first, let’s take a look at the original album.

Filmed – as was standard procedure for the cable series MTV Unplugged – in front of a small audience and featuring more-or-less acoustic readings of the artist’s work, Clapton’s Unplugged came pretty far into the whole “unplugged” story arc. The TV series had begin its life as a Jules Shear-hosted show with all manner of musical guests. Artists would render stripped-down, often more subtle versions of their (generally) well-known material. Beginning in late 1989, MTV Unplugged began airing, and by 1991 at least a couple of major stars had not only appeared, but had subsequently released live recordings documenting their performances: Paul McCartney‘s Unplugged (The Official Bootleg) and Mariah Carey‘s single cover of the Jackson 5‘s “I’ll Be there.” So by the time of Clapton’s Unplugged date, the idea was certainly neither new nor groundbreaking.

And by this point in Clapton’s career, his style had calmed considerably from the days of Derek and the Dominos‘ Layla and Other Assorted Love Songs (not to mention Cream), so the mellow approach was no significant stylistic departure for him.

Still, Clapton – joined by longtime musical associates including percussionist Ray Cooper, keyboardist Chuck Leavell and guitarist Andy Fairweather-Low – used the format to explore his love of the more acoustic-leaning “country blues” sounds that had long been a major influence on his playing. The result was a set heavy on covers (some might call them standards), with a few contemporary originals tossed into the mix. For his trouble, Clapton’s Unplugged LP scored him more than 10 million units sold, plus six Grammy awards.

The album’s most memorable cuts are a version of “Tears in Heaven,” the song about the tragic loss of Clapton’s son Conor, and a reinvention of “Layla” that bizarrely denudes the tune of its passion (and its classic extended instrumental coda), though it remains popular in many corners.

The new set expands the original album and offers three discs total. The first is an exact duplicate of the original 1992 CD, featuring fourteen songs form the television performance. The second disc features material recorded but not aired as part of the TV program, including three numbers (“Circus” and “Worried Life Blues” plus two takes of the unaired “My Father’s Eyes”) not broadcast, and four alternate takes/breakdowns of songs that did appear. A third disc (DVD) features the entire program as broadcast, plus an hour of previously unseen footage. None of the previously-unseen/unheard material is especially revelatory; they’re all very much of a piece. The booklet that accompanies the digipak is short on details; the opportunity to feature a contemporary essay on the performance has been passed up. And the cover art again features the grainy, “screen capture”-looking photo that graced the original release.

Verdict: good for Clapton fans who somehow don’t already have the lion’s share of this material on CD and DVD (or perhaps VHS); worthy of interest for most others, but not an essential purchase.