Album Review: The Roaring 420s – What is Psych? 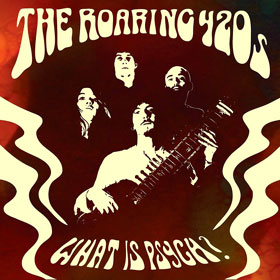 There’s a bubbling-under sort of cottage industry in sixties revivalism. And it’s been around for at least a couple of decades now, occasionally popping into the mainstream consciousness to enjoy a charting single or album. Of course Oasis raised the practice to fetishism in the 1990s, shifting millions of units for their trouble. And the (admittedly more modest) success of Rhino’s Children of Nuggets box set proved that, for many, the sounds and aural aesthetic of the 1960s have never really gone away.

Today we have Elephant Stone, The Allah-Las, The Black Angels and many others. Each has their own style based in whole or part on what was happening in the second half of the 1960s, but each, too, has their own identity. And the similarly-named (yet quite distinct from one another) bands The Fuzztones and The Fleshtones have been keepers of the flame for the more garage-y end of 60s style.

Paradoxically perhaps, it requires more than a modicum of originality to earn success in 2014 while reaching back half a century for one’s musical touchstones. The Orgone Box is one act (based in the UK) whose music somehow builds upon the sounds of old while transcending the eras to create something fresh and lasting; look for my review of their Centaur album soon in this space.

Another group of note with a similar level of quality is The Roaring 420s.

Okay, now that you’ve had a second or so to chuckle at the group’s name and get it out of your system, you’re ready to digest (or, ingest) their music. Yes, this is a case of band name as truth-in-advertising, though the music of this German-based group often suggests the intake of something stronger than a bit of weed.

Judging solely by the music, there’s little or nothing to suggest that The Roaring 420s are from Germany. In fact their sound is firmly rooted in mid 1960s Los Angeles: you’ll hear strong hints of The Music Machine, The Electric Prunes, and even (shudder) The Doors. The group has a real knack of combining the vibe of yesteryear with something far more important: a hook. Every track on What is Psych? is loaded with at least one – sometimes two, occasionally three – killer riffs or hooks.

The Roaring 420s come blasting out of the gate with “Bury My Burden” sounding for all the world like a much more pop-leaning Black Angels. Fuzzy guitars and a heavier bass than is usually the case in sixties garage stomp forward, aided by some especially tasty combo organ work. And it’s the keyboards that push the music on What is Psych? past the very-good mark toward something really special. The band’s call-and-response vocal approach (employed on some but certainly not all tracks) pulls the listener in, if they weren’t already all-in.

Typically, songs of the type one will find on What is Psych? are of the three-minutes-and-out variety. It’s a testament to the strength of the band’s songwriting and arranging that many of the cuts on What is Psych? extend well beyond that mark. Catchy soloing that actually goes somewhere is backed by hypnotic backing; even at seven-plus minutes, a tune like “Bury My Burden” never so much as threatens to wear out its welcome.

The band cleverly builds its arrangements in a way that means sometimes one member is turning out a memorable solo, while the rest are providing sympathetic support. But then, perhaps, the bass and guitar will engage in lockstep riffing. Then it’s Florian Hohmann‘s combo organ and Timo Elmert‘s guitar in octave-apart unison. Then, maybe Martin Zerrenner‘s bass and Hohmann’s keys. And it all works, anchored by Luisa Mühl‘s solid drumming.

In places (as on “Blue Jay,”) The Roaring 420s sound like early Velvet Underground supercharged with the sort of pop sensibility the VU wouldn’t display until Loaded. (And the 420s are not nearly as dark as the Velvets; they seem to be having a good time.)

Like Elephant Stone (who, at will, they they can sound like) the 420s make intelligent use of sitar, as on “These Woods of Stone.” But their shimmering, riff-based pop tunes – exemplified by “Another Chance (to Blow)” are where they truly shine. The Roaring 420s have figured out to just what degree they can employ repetition: more and it would be overkill, less and they’d be leaving riffs on the table (so to speak).

Mid-album (especially on “Hey Hey Rider”), the group seems to take a brief detour into a slightly different style, one that suggests a Blonde on Blonde era Dylan crossed with, I dunno, The Fugs. Hohmann does his best Dylan but ends up sounding more like Lou Reed. But on “Yes I Am” the quartet make it clear that they won’t be pigeonholed on every tune. The bright piano work that forms the track’s basis illustrates that there’s still room for expanding the parameters of what-is-psych, Sixties style.

It’s Blues Magoos time on “You Had to Learn it the Hard Way,” taking a familiar blues lick and building a track around it. The result threatens to yield a less notable tune, but the “ba-ba-ba” vocals suggest what might’ve happened if The Mamas and the Papas dropped by a Magoos recording date.

Thick fuzz riffage against a piano backing makes “Saturday Night” alright for this album, though here the lead vocals sound curiously like Tom Verlaine. The folky strains of “Pill Hill” suggest the Velvets’ more gentle, contemplative moments. Rhyming “jello” and “pillow” is a bit dodgy, but the Al Kooper-style organ work means they earn a pass.

The Roaring 420s save the best for next-to-last: the slow chugging vibe of “Tourist” crosses a Neil Young and Crazy Horse approach with (again) Television, and the result feel like epic storytelling, whether it is or not. After several guitar solos – none of which feels excessive – an extended (and finely textured) keyboard solo conjured pleasant memories of the late Ray Manzarek. Even at eight minutes, not a second of “Tourist” feels gratuitous or wasted.

The fuzzed-out, low-key “You Will Never Be the Same” ends the album on a blurry note, providing a calming chill-out to send listeners home after this trip through the past. But not too calming: in spots, the tune feels like C.A. Quintet‘s dark classic “A Trip Thru Hell.”

For those who dig the psychedelic vibe of the 60s but want strong melodic underpinning, but who insist upon something they haven’t heard before, The Roaring 420s’s What is Psych? may be just what the doctor ordered.