Book Review: One Way Out 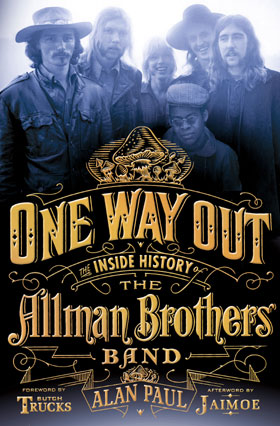 The members of The Allman Brothers Band – and there have been many – tend to think of themselves as a jazz band. The onstage interplay owes, they argue convincingly, more to a jazz players’ aesthetic than to the comparatively aimless, noodling approach employed by a “jam band.”

That surprising fact was but one of the many things I learned reading Alan Paul‘s new “oral history” of the band, One Way Out: The Inside History of the Allman Brothers Band. This surprisingly engrossing book – I say “surprising” because while I enjoy large swaths of the ABB catalog, their history hasn’t interested me much beyond the all-too-brief Duane Allman days – draws the reader in and holds attention through the rocky, twisted path the group follows to the present day.

Causal fans (and for once, that term applies to me) tend to believe that keyboardist Gregg Allman and his guitarist brother Duane were the centerpiece of the band. But One Way Out argues forcefully – by the totality of its multi-person point of view – that the band was and remains much more than that. Bassist Berry Oakley, guitarist Dickey Betts and drummers Butch Trucks and Jai Johanny Johanson (Jaimoe) all contributed in their own significant ways to the band’s sound, personality, and aesthetic. The book explores the band’s history from its earliest days (in the form of the bands that would end up serving as “farm teams” for the original ABB) by quoting all of the available personalities involved. Alan Paul’s history with the ABB extends far back into the mists of time, so many of his interviews date back far as well. The author occasionally weighs in at key points (noting his contributions in italics) only to provide context where a direct quote won’t work as well. And as he notes in his introduction, when accounts vary – or stand in mirror opposition – he does his best to give both (or all) sides equal time, leaving the reader to draw his or her own conclusions (or not).

The band’s history is so tumultuous – and some of its mid-period work so drearily uninspired – that readers may be cheering part-way through for the band to throw in the towel. But just when things look the darkest, some sort of turnaround takes place. Maybe it’s a half-hearted, cash-inspired one (see: the group’s Arista years), or maybe it’s thanks to the infusion of some fresh, new talent into the fold (see: the additions of Chuck Leavell, Warren Haynes, and Derek Trucks).

As best as he can, author (“editor” might be a better word) Paul alternates between featuring band member voices as fluidly as possible. But at key points in the story – most notably whenever Gregg Allman is in one of his frequent drug- and alcohol-related downward spirals – certain members seem to go silent. (By “certain members,” I of course refer to Gregg Allman.) It’s not difficult to envision in one’s mind’s eye a scene in which some or other member is recounting Gregg’s detachment from active membership in the band, while across the room, the keyboardist is staring at the floor, quietly and ineffectually mumbling. This is, however, the only characteristic of the book that can conceivably be termed a flaw. The book’s narrative style overall has the feel of being in a room with all the principals, each weighing in when they have something relevant to offer.

Those whose interest lay more with the intricacies of how the band worked in the studio might find One Way Out a bit shallow on that score; far more space is given over to exploring the interpersonal relationships among the band members, their crew (nominally considered equals to the band, but often not treated as such), and wives/girlfriend etc.

That said, the voices of most of the female characters (and nearly all of the crew) fade away mid-way through One Way Out. Judging from the manner in which the members are quoted, it would seem that around the time of Haynes’ first tenure with the ABB, the collective focus was placed (back) onto the music. The results as represented by their music tend to support this interpretation.

With the obvious exception of the departures of Duane Allman and Berry Oakley (and Haynes, though he’d return), when a member leaves the band, the collective voice portrayed in One Way Out makes it seem largely for the best. The wondrously talented Leavell is seen to have not been given a fair chance, and to have had certain factions aligned against him (fairly or not), dooming any chance of his long-term success within the ABB.

And when Dickey Betts finally leaves (did he jump or was he pushed?), many readers will breathe a sigh of relief, while never questioning the man’s talent. Those not deeply familiar with the band may well wish they had a bookmark in the form of a laminated “Rock Family Tree” a la Pete Frame to help them keep score on the who’s-in-who’s-out nature of the band, and especially in the earlier parts of One Way Out, it’s easy to lose track of whether a given quoted character is a player, roadie, friend, or something else. But in the end (and with some key exceptions), who’s saying what matters less than the overall collective thrust of the narrative.

As any book of this sort should do, One Way Out will renew the reader’s interest in revisiting long-forgotten tracks, and may lead them to explore material with which they hadn’t previously bothered. To that end, Paul helpfully appends the book with a critical rundown of the ABB catalog. Perhaps his decision not to present the catalog in chronological order might have something to do with a wish to avoid exposing just how lengthy a weak patch the ABB endured. But Paul argues convincingly for some lesser-known gems among the dross, and he isn’t afraid to call out the band for their ill-advised, lifeless product when doing so is warranted.

Essential reading for fans of this widely-loved band that calls itself a jazz group, One Way Out is also a fascinating read for anyone wishing to go deeper than the music of The Allman Brothers Band.