Bill Kopp: Though you’re certainly grounded at least in part in rock styles, another remarkable quality of your musicianship to me is the way you take more of the jazz player’s approach to arrangement: you’re not stingy about having all the solos. Everybody gets a chance to shine. Is that a conscious goal of yours when arranging songs for recording and/or live performance? 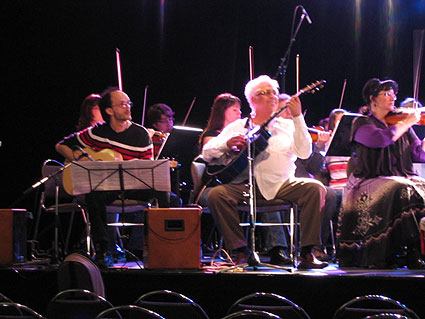 Larry Coryell: Well, if you’re gonna play with other people, you’ve got to let them express themselves. It doesn’t make any sense to me to do otherwise. I know other people have different philosophies.

BK: I mentioned to my friends on Facebook that I would be speaking with you, and a number of my friends and readers commented enthusiastically. One mentioned seeing you in the early 70s on a bill with The Faces and Argent. How was it, playing to rock-festival type crowds? Were they receptive to the fusion-leaning sounds you were turning out?

LC: Yeah. There were really no barriers. During that time, there were no barriers between the definitions of styles so much. Basically, if your group could get out there and ignite excitement in the public, that’s all that mattered.

BK: I think that’s been lost to some degree now; everything’s all about market segmentation.

LC: That’s true. But it’s a reflection of the times. The times in which we were living back then – the late 60s and early 70s – was the sexual revolution. Revolutions were going on. All kinds of weird stuff was going on; go look at the movies that were made at that time. Nothing like the movies that we have now.

BK: Your sons are musicians as well. To what extent did you encourage them to develop musically? It seems like a daunting proposition to pick up the guitar when your dad is Larry Coryell.

LC: For them, it just happened naturally. The youngest one leaned more toward learning jazz harmony early on, and the oldest one took a little bit longer to choose to become a musician. But he wanted to choose a style for himself that was not like either what I do or what his younger brother was doing. So he got into rhythm and blues a lot, and singing.

It was very organic the way they developed; I didn’t really push them at all. 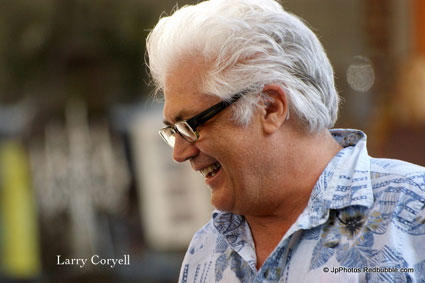 BK: Another one of my readers remarked on the fact that while you can certainly play fast when you want to, you often avoid competing in the “speed demon sweepstakes.” He wants to know if you intentionally made a point of not going there.

LC: Well, when you’re playing a lot of fast stuff, you’ve got to be careful; very often you can end up not playing music. And the goal of all this is to make music. Sometimes the heady technique is required in order to express what you’re trying to do. But you still have to be musical; that’s what really touches the heart.

BK: Another friend mentioned to me that – and I don’t know anything about this – you did a gig in the 70s with Jack Bruce and Mitch Mitchell. Can you tell me about that?

LC: That was a Jack Bruce tour. Jack did a tour in 1971 – I think it was 1971…might have been ’72…some historians can pinpoint the actual year – and we did a big tour of America. We had my keyboard player, who eventually became the keyboard player in Eleventh House, Mike Mandel. So it was Jack on bass, Mitch on drums, Mike on organ, and myself. And we did Jack’s music because it was a Jack Bruce gig. And it was very…interesting.

BK: It would be nice if some live recordings from that tour might turn up…

LC: Well, everybody was so loaded. It was pretty sketchy. Pretty checquered. It all depended on how many sheets to the wind you were. The whole room was loaded. I think Keith Jarrett was the only one who was sober. 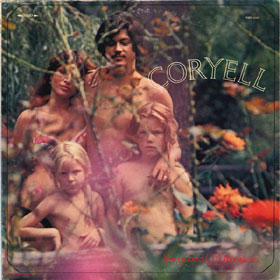 BK: We touched on this briefly a few moments ago. Every critical overview of you and your career that I read makes essentially the same point: you are under-appreciated. It’s been suggested that you get bored sticking with one style for very long. And it seems to me that had you decided to stick to one style, you might have enjoyed more commercial success. Because of course record companies – and listeners for that matter – often prefer music they can pigeonhole, that isn’t too demanding of them, that doesn’t challenge their expectations. What do you think about that?

LC: Well, there’s some truth to that. If you jump around styles, market-wise it’s a problem. But you know, I work so much…a lot of the time these days I’ll turn down work because I don’t need the money, and I don’t want to do that particular kind of music.

I had a great year last year. I think that sticking to my guns took awhile, and it was a late-blooming thing. But it’s paid off.

LC: There are recordings of the Rimsky-Korsakov. It came out pretty good. The Stravinsky was checquered; I wasn’t happy with two of those. But the third one – and I can’t even find the record – was a masterpiece. Just by accident, that one worked out.

Last year I was given an assignment to do The Rite of Spring with six guitars, and it didn’t quite work out. It got too crazy, too complicated.

The value of doing all those classical transcriptions was in getting an education for me. Even though I wasn’t aware of it, I was getting an education, [helping me] to do my own classical music. Or classically-oriented music. One of the things that I want to bring to the world of performance is an opera that I wrote, based on Tolstoy‘s War and Peace. It’s isn’t gonna be a real jazz thing; I haven’t figured out where the jazz is gonna go yet.

When you learn to play – for example – The Rite of Spring, a lot of that rubs off on you in your future approaches to composing and playing. So I’m not so eager to perform Stravinsky as I am to perform what I’ve learned from Stravinsky. It was like an extremely serious music lesson. Stravinsky is absolutely amazing.