A Chat with Larry Coryell, Part One

One might describe Larry Coryell as something of an undiscovered legend. To those in the know – jazz/fusion aficionados and those like me fortunate enough to stumble onto his vast catalog by accident – he’s one of the greats, certainly a peer of names such as John McLaughlin and Pat Metheny. But to the world at large, he’s much lesser-known, despite dozens of highly-acclaimed albums under his own name, not to mention even more brilliant sessions in which he lends his expressive and highly varied playing to the work of others. His first solo album Coryell was released in 1969, and his most recent, The Lift, came out a few months ago. I spoke to a very jet-lagged guitarist mere hours after his return from a tour in Japan with famed bassist Ron Carter. Though clearly exhausted, he took the time to engage with me in a wide-ranging conversation. Here’s Part One of our talk. – bk

Bill Kopp: I’ve been listening to a lot of your music lately – from The Free Spirits to your first couple of solo albums, from the Gary Burton albums in the mid 60s to Eleventh House, from the reunion album with Alphonse Mouzon to the Young Django album with Stephane Grappelli, from Herbie Mann‘s Memphis Underground to your new album The Lift. The thing that amazes me the most about all of it is how nothing sounds like anything else. Unique among all the well-known guitarists I can think of, and I mean this in the best possible way, you don’t seem to have any particular “signature sound.” Is that by design? 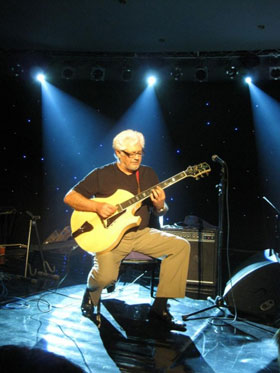 Larry Coryell: Yeah. Most jazz guitarists — most instrumentalists, for that matter – have done really well to have the same sound. So it’s recognizable, so they can have a “brand.” So they don’t get lost in the shuffle, because there are so many musicians out there vying for your ear.

I didn’t do that; I don’t know why. I try to do a lot of different things, because for me – and this is just for me – staying in just one place hasn’t interested me that much.

BK: Similar to John McLaughlin but unlike most other guitarists, you work equally effectively with both electric and acoustic guitars. Do you approach them as wholly different instruments, similar to, say, the difference between piano and organ, or do you see them as basically similar?

LC: Oh, they’re different. You have to have a different technique on the acoustic. Because you’re not aided by anything electric. Generally I have to use more power on the acoustic; your hands have to be stronger. But that’s just generally; there are exceptions to every situation.

BK: You’re classically trained, though that training has never manifested itself in your playing in a way that makes you sound stiff and mannered.

LC: I certainly hope not. 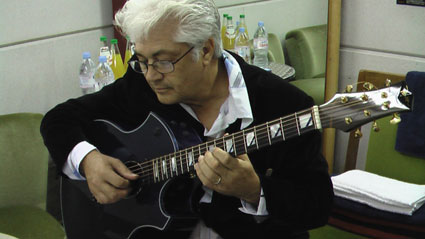 BK: What kind of music did you listen to in your formative teenage years?

LC: Well, I grew up in the sticks. So I listened to a very limited amount…not very much classical, not much jazz. But I had a guitar teacher who had a great record collection of jazz people, and those were the core.

Where I grew up was so provincial – how can I describe this – I was more focused on the guitar and different types of guitar playing before I understood the subtleties of jazz playing per se. I didn’t know there was a history of jazz; I didn’t know it had roots going back, maybe, to the 19th century. I just wasn’t aware of that. I was not aware at all that jazz was essentially an African American music. I was just listening to people play it, and I liked what I was hearing. I was totally naïve. The first Wes Montgomery album I got, I thought it was incredible, whatever it was.

BK: I’ve read that you started playing locally and regionally in the Pacific Northwest in the early 60s. Were you a fan of – or perhaps even involved in – the scene that included groups like The Wailers, The Sonics, The Viceroys, Don & the Goodtimes, Paul Revere and the Raiders?

You couldn’t avoid it at my age. It was what we called “youth music.” And it was nice. Rather than playing what my parents wanted to hear, I was motivated to play what I wanted to hear. 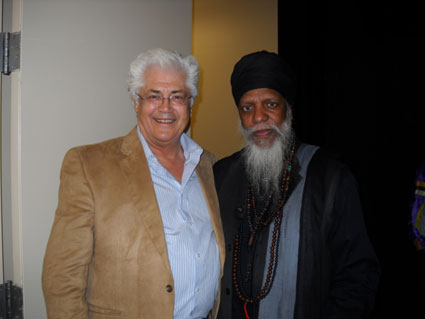 I played in a band that was like The Wailers and The Dynamics. I was interested in all music. And in regard to young people’s music at that time, we were all networking. When I was in college in Seattle, for one year I shared a residence with the lead guitar player of The Wailers. Back then, a lot of us got into playing through rock’n’roll, more simple-oriented stuff. It was more youth-oriented stuff, which is neither bad nor good. And that kind of opened the door to jazz. Because both jazz and rock’n’roll have the blues as a foundation. There’s a living connection that way.

BK: The Lift almost sounds like a sampler of your abilities, a collection that displays your various musical interests. There’s a track that has the sound and feel of early Led Zeppelin; there’s some boogaloo-style stuff with some tasty organ work; there are solo acoustic pieces. When putting together the album, was it specifically your intention to present a cross-section of your stylistic abilities, or is that simply how it turned out?

LC: It’s the way it turned out.

Basically we went in there saying, “okay, if Jimi Hendrix had stayed alive, what are some of the things he might be doing?” Because Hendrix really set the standard for creative, electric, overdriven playing.

BK: And toward the end, he tipped his hand toward a greater interest in jazz…

BK: From the note on the back of the album, I see that The Lift was recorded in just a couple of days. And the photo suggests that much of it was cut live in the studio. Is that correct, and to what degree did spontaneity play a role in how the album turned out?

LC: That’s what it was; it was all about spontaneity. Learning the stuff right then and there.

I was actually doing a regular gig down the street from Berkeley, in Oakland. I was doing a project at Yoshi’s club. So after I’d do my gig at Yoshi’s, I’d go up to Oakland and play a couple of hours, in the wee hours of the morning. It was fun.