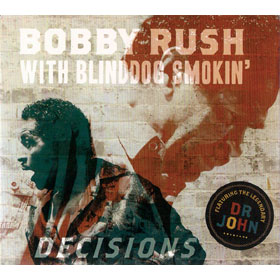 An authentic blues album is a rare thing in 2014. Maybe it’s a function of modern recording techniques; I don’t know the reason. But most attempts at capturing the blues in the context of a recording session end up feeling and sounding sterile and lifeless, rote and unimaginative.

The good news is that the current state of blues releases has the effect of shining a brighter light on those albums that truly do rise above. And that’s the case with Decisions, the new CD+DVD release from Bobby Rush. Ably backed by the seasoned party band Blinddog Smokin’ (Chicago Chuck Gullens on drums, bassist Roland Pritzker, Mo Beeks on keyboards, guitarist Robert “Chalo” Ortiz, and vocalist Carl Gustafson out front) plus assorted studio cats on additional guitars, saxophones and whatnot, Rush delivers his soulful vocals in a style that laid back enough to convey the I-got-this attitude without breaking a sweat.

Dr. John (Mac Rebbenack) shares lead vocal duties with Rush on one tune, the album opener “Another Murder in New Orleans.” And while the album packaging makes a bit too much of this single-track collaboration (“Featuring the Legendary Dr. John” is emblazoned on the cover artwork, and a great photo of the duo serves as the booklet’s cover), the tune will leave listeners wanting more from these two grizzled veterans of music.

In fact, the Gustafson-penned “Another Murder in New Orleans” fits smoothly into the sonic space of the album overall. Rush composed five of the album’s ten tracks, including the smoky title song. And he has a sympathetic foil in Gustafson, the writer (either solo or with others) of Decisions‘ other tracks. Gustafson included two numbers written to be autobiographical (sic) tunes, and their titles make clear their subjects: “Bobby Rush’s Bus” purports to tell the story of “nineteen years on the road” with Rush, and an announcer lets us know who’s taking each of the four solos. And the wry and comical “Dr. Rush” casts Bobby as a radio call-in advice resource.

In fact, nearly all of the tracks on Decisions aim for a slice-of Bobby’s-life vibe, and those slices are upbeat and grin-inducing. “Too Much Weekend” tells the story of the Monday-morning effects of a weekend of over-stimulation. Full of stabbing horn chart work, “Funky Old Man” implores the listener to do a new dance called the “Fred Sanford.”

Elsewhere, “Love of a Woman” mines well-worn lyrical territory familiar to any blues fan, and “If That’s the Way You Like It I Like It” is sung in the voice of a man who will seemingly put up with anything to keep his woman. And “Stand Back” folds in some Cuban salsa elements, answering the unasked question: What would Santana‘s “Smooth” sound like with Bobby Rush out front instead of that Matchbox 20 guy?

The included DVD features a video for “Another Murder in New Orleans” featuring Rush onstage with the band at One Eyed Jack’s, with Dr. John on piano and vocal. Some clever, highly stylized animation and handheld street-scenes camera work, adds interest, though the black-and-white narrative sections are perhaps a bit too literal. But overall, it’s an exceedingly well done clip. A brief interview of sorts with Dr. John is interesting, but the intercut footage of Rush sitting on a stool in the studio doing some solo blues with only his voice and harmonic is worth seeing.

Rush’s previous album — 2013’s Down in Louisiana – earned a Blues Music Award for “Soul Blues Album of the Year,” and since Decisions is every bit as good, it will be worth watching to see if this new album gets similar notices.