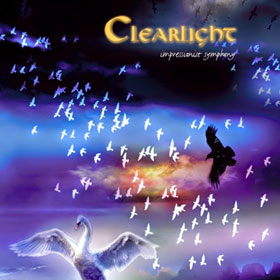 With precious few exceptions, attempting a classical-rock hybrid is at worst a fool’s errand, at best a thankless task. All too often, this most ambitious of goals – bringing together fans of intricate, densely layered orchestral work and searing, heavy rock – ends up pleasing no one. At its most insipid, the result is something not unlike Mannheim Steamroller: lite (as opposed to light) classical music with late-period ELO style backbeat grafted on, a sort of Stars on Classical. At its best and most challenging, it’s the work of someone like Glenn Branca, who combines the sheer monstrous power of electric guitar with the sonic complexity and bombast of 20th century classical composition (Krzysztof Penderecki, Conlon Nancarrow).

But on the other hand, considering only those two extremes presents the listener with a false choice: commercial pap versus unlistenable (to most) clatter. In the right hands, it is quite possible to combine the two genres into something that is aesthetically and artistically rewarding while remaining tuneful and accessible. Jeff Lynne did it with the aforementioned Electric Light Orchestra, especially on the group’s second album ELO II: do yourself a favor and listen again to their long version of “Roll Over Beethoven.” And the under-appreciated, backlash-suffering Klaatu created a lovely rock-meets-classical work on Hope, their second album: “Prelude” has the instrumentation of orchestral music plus what Spinal Tap might call the majesty of rock.

Plenty of progressive rockers have made forays at bridging the gap: Yes and the group’s on again off again keyboard virtuoso Rick Wakeman have both enjoyed some serious success in the genre. And of course The Moody Blues made a career out of the style: their first and best Days of Future Passed is a classic, even if at their worst they may well have inspired Mannheim Steamroller.

Keen readers may note that nearly all of the artists mentioned so far in this essay did their most notable work roughly between 1967 and 1977. For the most part, the goal of hybridizing classical and rock went out of style around the time new wave presented a hybrid of its own (mainstream rock and punk). But the concept’s not dead: the new album Impressionist Symphony breathes some new life into this thought-moribund genre.

Clearlight (no relation to the 60s group on Elektra whose bassist played on The Doors‘ albums) is the nom de musq of Cyrille Verdeaux and the assemblage of musicians who join him in this latest venture. After his music was described to him as “impressionistic,” he decided to create a work that paid homage to the work of visual artists most closely associated with the painting style.

What this means from a programmatic, literal standpoint is that listeners will find eight tracks, each with a bad-pun title referencing one of the masters (sample titles: “Lautrec Too Loose,” “Time is Monet”). My advice, however, is to ignore the silly trappings of the concept and instead enjoy the music and its successful, wordless implementation of its goal. The instrumentation is largely built around Verdeaux’s Kurzweil 2600 keyboard (a real winner at recreating the textures and sonority of classical instruments) plus acoustic violin, joined in strategic places by rock guitar (courtesy of Steve Hillage) and flute (from Hillage’s old Gong bandmate Didier Malherbe), bass, Chapman Stick, Theremin, and assorted percussion in both rock and classical idioms. Oh: and more synthesizers, plus the occasional Bösendorfer piano.

The result is warm and organic, avoiding the large prog/classical pothole of becoming sterile. The music evokes a wide array of emotional tones, and while it’s nice enough as background music, Impressionist Symphony is best enjoyed when given full attention.