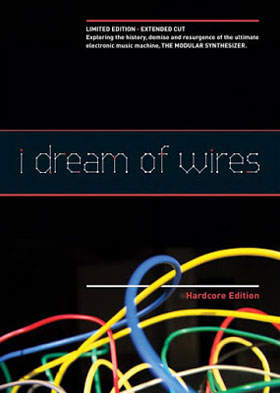 The producers of I Dream of Wires‘ “Hardcore Edition” weren’t kidding when they named the film. The original film is a lovingly detailed and insightful feature-length documentary look at the analog synthesizer: its genesis, birth, evolution, demise and subsequent surprising rebirth. Drawing on history and contemporary interviews with synth fiends you’d recognize (Skinny Puppy‘s Cevin Key, Nine Inch Nails‘ Trent Reznor), I Dream of Wires successfully explains the appeal and intimidation factor of the mighty beast that is the analog synth.

Though I consider myself more than a casual aficionado of the analog synthesizer (I own several, though none are the impossibly expensive switchboard-panel looking modular design), I learned quite a bit watching this film. You know those stories where two people are working concurrently, yet independent of one another, racing toward a similar end? You know, like Nikola Tesla and Thomas Edison? Well, Bob Moog (“east coast”) and Don Buchla (“west coast”) shared a similar story. Buchla’s approach was – his adherents would arguer – more “pure,” as he didn’t wish to limit/encumber his synthesizer with anything so drearily commonplace as a keyboard. Moog, on the other hand, thought in more practical – yet equally groundbreaking) terms, so even his earliest monophonic modular synthesizers were controlled by a keyboard that would render the machine at least nominally familiar to a pianist or organist.

I Dream of Wires gets into much more than that, though, as it charts the decline of the analog synth in favor of the sterile Yamama DX-7 in the 1980s. In that period, old Moogs could be picked up secondhand in pawn shops for next to nothing ( to wit: I bought a Moog Rogue in 1982 for, I think, $125). But as the 90s unfolded, select musicians began to rediscover the joys of “real” synthesizers (there’s an oxymoron for ya) and things have been on a slow, gradual upswing ever since.

The new “Hardcore Edition” expands on all of this, and may be more than the average viewer wants (or can handle in a single sitting). But if one views it more as a series or miniseries, the four-hour DVD makes for excellent watching.