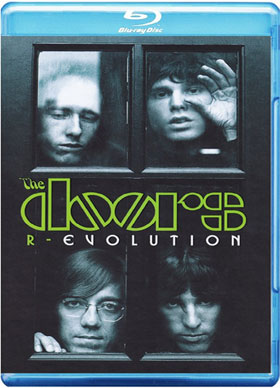 Many of the best-loved bands of the 1960s don’t own the rights to their own material. What this means in practical terms is that they don’t have the freedom to put together career-spanning DVDs that offer a comprehensive look at their work in their most vital years. (and the opportunity to profit from same.)

When I think about this fact, one of the first bands that comes to mind is Paul Revere and the Raiders. On television in their heyday more often than The Monkees (if you can wrap your mind around that fact), The Raiders have not a single DVD showcasing their material. (Direct your inquiries to Dick Clark Productions, the entity responsible for the non-existence of Raiders video product in the 21st century.)

Other bands have either fared better, or worked to secure rights to their material. The Doors were always careful stewards of their work product, so it’s not surprising (though it is most welcome) that there’s a new DVD – with a run time (including bonus material ) of nearly two and a half hours – documenting their film and television output.

R-Evolution is a thoughtful survey of The Doors’ music in video form, without any annoying voice-overs or other superfluous content. It’s just the videos. And as the liner notes make clear, the pointedly chronological organization of the clips emphasizes how the band started out “playing the game” (see performances on American Bandstand – Clark again! – from 1967), but quickly asserted control of their product and made more abstract, idiosyncratic films that fit with what we today recognize as the Doors aesthetic.

The sourcing of these clips is exceptional, and the quality beats the hell out of anything that circulated among (cough) bootleg collectors. Trust me on this. Clips from Murray the K‘s TV show, Jonathan Winters‘ show, and various European musical programs have an undeniable kitsch factor (“Light My Fire” on Malibu U features a setting inspired by a laughable, wrongheadedly literal interpretation of the lyric, and must be seen to be believed).

But the later material is – as it should be – odd and much more Doors-y. Music films produced by the band themselves lean more on live footage and in-studio clips than any sort of pantomiming by the band. And even the 1980s clips – made to take advantage of the medium’s ascendancy in the age of MTV – are fascinating if a bit dated.

The copious bonus material on R-Evolution rounds out an excellent disc that deserves to be a part of any serious 60s music fan’s collection.