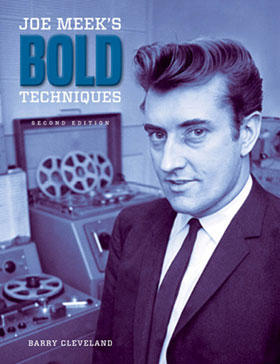 People like sensational stories. It’s an unfortunate fact, because the public’s focus on the superficial and lurid often obscures a deeper, nuanced story beneath. Barry Cleveland is not one of those people who is satisfied – or even interested – in the shallow, sensational stuff. Thank goodness for that, because his book Joe Meek’s Bold Techniques (newly reprinted in an updated second edition) instead focuses on the independent producer’s studio innovations, which is, after all, why Joe Meek is important.

Cleveland’s concise, conversational writing style is uniquely suited to a discussion of Meek’s studio techniques. What Meek did, in many cases, was to develop forward-looking methods of creating and adapting sounds, often bending the function of then-existing equipment to suit his ambitious goals. Not exactly a savant, Meek possessed considerable technical prowess, but was sorely lacking in other areas (to name one, he couldn’t carry a tune in a bucket). So most discussions of what-he-did and how-he-did-it would tend to get fairly deep into the weeds of studio jargon and technical language. But in the more than capable hands of Cleveland (an accomplished musician in his own right), Meek’s story is told in a manner that the non-musician can understand and appreciate. Even if one has never set foot in a recording studio and has no idea what things like flanging, panning and multi-tracking are, a read through Joe Meek’s Bold Techniques will not only provide clear, understandable descriptions, but it will also help the reader learn why Meek’s work in the studio was so groundbreaking.

Meek was responsible for a lot of hits on the UK charts, especially in the pre-Beatles era. The Tornadoes‘ “Telstar” is far and away his most well-known production, followed closely by The Honeycombs‘ “Have I the Right.” But he produced quite a few other tracks, many of which are significant in their use of various studio wizardry.

Some writers have attempted to draw parallels between Meek and another deeply troubled studio genius, but the approaches of Joe Meek and Phil Spector differ greatly. Again, setting aside the sensational elements, a more apt comparison might be made – as Cleveland illustrates – between Meek and Les Paul, the man generally credited with the development of multitracking (sound-on-sound layering of recording tracks).

In addition to a historical run-through of Joe Meek’s career as a producer, Cleveland also goes into great detail – in the style of a forensic accountant – concerning the equipment Meek bought and/or had at his disposal, and the ends to which it was applied. Even here, Cleveland deftly balances the need to provide great technical detail with the goal of telling a good story that will hold the interest of non-techies.

Cleveland’s approach also involves extensive interviews with as many people as possible who were connected to Joe Meek. So as a result, the reader gets the perspective of fellow studio technicians, as well as studio musicians who worked with him. (The most notable of these is Ritchie Blackmore, who did some truly amazing work on a Meek production of The Outlaws‘ 1964 raver “Shake With Me.”) The author also draws upon interviews that Meek himself gave for a BBC documentary. Taken together, and supported and expanded by Cleveland’s keen analysis, the result is a three-dimensional portrait of Joe Meek and his pioneering work.

As an essential companion to his incisive track-by-track deconstruction and scrutiny of Meek’s 1959 recording I Hear a New World: An Outer Space Music Fantasy, Cleveland provides a streaming version of the album on his website, not in its officially released form, but instead as Meek had originally intended it. This undeniably idiosyncratic work remains highly evocative of the scenes Meek had in mind: when my partner heard “Entry of the Globbots,” she remarked – not having read the book or knowing the album’s background – “It sounds like like little guys marching on Mars, waving batons.” Bingo. A listener with a more musically studied ear might note similarities between parts of I Hear a New World with the work of Frank Zappa, Ennio Morricone, and The Residents, though Meek’s work is more accessible than two of those three (guess which).

NOTE: Joe Meek’s Bold Techniques is available in both print and eBook versions by following this link.