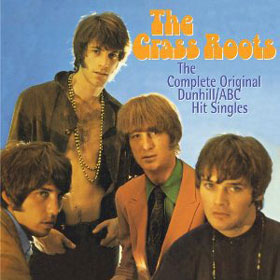 It’s common knowledge that many rock and pop groups of the 1960s sat on the sidelines while seasoned studio musicians (see: The Wrecking Crew) played on the songs credited to those bands. As is often explained, it wasn’t necessarily that these bands couldn’t cut it in the studio; it was more about expediency: a drummer such as Hal Blaine, or a keyboardist such as Joe Osborne could get the track done in a take or two. So it was generally a simple matter of time- and cost-savings.

Of course some bands bristled at the practice. The Monkees‘ Mike Nesmith famously came to blows with Don Kirshner, and The Monkees eventually got their way with the excellent Headquarters. And to this day, certain ex-members of Paul Revere and the Raiders get very tetchy when the subject of studio cats on their records is even mentioned.

Other bands took the practice in stride. One of these was The Grass Roots. And for their more compliant attitude – coupled with undeniable talent in the vocal department – they were rewarded with a surprisingly long string of hit singles. Their run lasted from 1965 (when they covered a brand-new Bob Dylan number called “Mr. Jones (Ballad of a Thin Man)” through 1973, when their last hit single “Love is What You Make It” scored respectably on the charts.

Along the way, there were some commercial failures and near-misses. But the approach taken on the new Real Gone Music compilation The Complete Original Dunhill/ABC Hit Singles is to focus on that key word – “hit” – and build an album around it. The result is twenty-three charting singles (plus a “censored” alternate-lyric version of their monster hit “Let’s Live for Today”) and an album that is staggering in its consistent quality.

The Grass Roots drew upon the most effective (I’d say “best” but that’s a bit of a subjective term) songwriters working in the era. Many of the group’s tunes were penned by the team of PF Sloan and Steve Barri, but that team also oversaw much of the group’s production, arranging and song selection. And though Grass Roots songs came from the pens of many different writers, there’s a surprising consistency to their work as viewed from the singles perspective.

Unlike some groups, The Grass Roots didn’t solely choose as singles songs that had been written for them: they were unafraid of doing covers, especially if the original was, say, a semi-hit overseas with Italian lyrics (“Bella Linda”) or a domestic hit at the lower rungs on the chart (The Forum‘s “The River is Wide”).

The band’s secret weapon was its vocal strength. With Rob Grill on lead vocals (except on those very early singles) and guitarist Warren Entner adding his second- and/or harmony vocals, the Grass Roots had a distinctive sound, no matter whose song they were singing. And their approach allowed them the ability (so critical to chart success) to subtly alter their style as musical fashions changed. So while “Bella Linda” has a Sgt. Pepper-era flavor to it, “Midnight Confessions” heads in a Motown direction with its punchy signature horn charts. And “Walking Through the Country” mined the Southern country/pop/soul vibe that was fashionable at the dawn of the 70s (see also: Hamilton, Joe Frank & Reynolds‘ “Don’t Pull Your Love,” a song The Grass Roots had earlier passed on recording).

All the big hits are here on this collection – “Where Were You When I Needed You,” “I’d Wait a Million Years,” “Temptation Eyes” – but the lower-charting singles are of similar quality. Listeners who don’t regularly turn to their old Grass Roots LPs will doubtless be surprised by just how good cuts like “Lovin’ Things” and “Baby Hold On” are today. Even the relatively trite and underwritten lyrics of “Two Divided By Love” are saved by a killer hook or three.

Anyone who claims an affinity for AM radio pop of the late 60s and early 70s will delight in this collection. It’s made even better by an extended liner essay from Ed Osborne, in which the author hits the high points, delivers on details, and – most importantly – gives the group the respect they deserve without overselling or engaging in hyperbole. Essential.