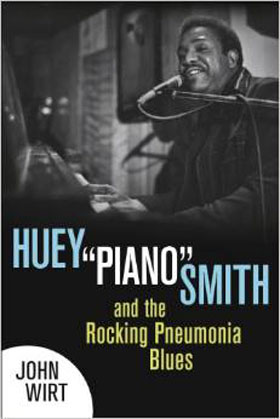 One need not dig very deep into the collected history of popular music to discover tales of artists who’ve been ripped off, gotten the short end of the stick, been robbed or gotten screwed. And for a long list of reasons – many of which have to do with our country’s history of racism – African-Americans share a disproportionate amount of the shelf space of those artists. Not to say that white artists didn’t get cheated regularly too, especially in the 1950s and 60s.

Huey “Piano” Smith is, in some ways, just another name on that long and shameful list. His authorship of some of pop music’s treasured titles – “Sea Cruise,” “Rockin’ Pneumonia and the Boogie Woogie Flu,” “Don’t you Just Know It” and a handful of others – is shared (in a legal sense) with others, and the saga of the ownership of his songs makes for a sad and demoralizing tale.

That tale forms the basis of John Wirt‘s new book, Huey “Piano” Smith and the Rocking Pneumonia Blues. Charting Smith’s life and career form his beginning in New Orleans, Wirt paints a picture of a man seeming all too ready to place in his trust in the latest of a long line of so-called advocates — lawyers, business people, managers, promoters – each of which (the author makes plain) takes his cut and then pretty much splits. Repeatedly, Smith sours on said advocate, and then the legal machinations being anew.

And each time, nearly without fail, things work out in favor of the other guy. Wirt’s book is not an upbeat one: the book reads like a relentless parade of bad decisions, misplaced faith, and unscrupulous characters. And for his part, Smith doesn’t seem to be the sharpest guy around: he gets suspicious of those who might (might, I say) have his best interests at heart, while remaining unflinchingly trusting of those who (the story suggests) stand ready to exploit him at every turn.

Often Smith seems to get in the way of his own success. He comes off in the book as someone who can’t quite decide if he wants success in music or not (though it’s clear at every turn that he wants and deserves respect, something else entirely). Burned far too many times, the man largely gave up on his music career in favor of a life centered around his marriage and devotion to his particular brand of religion (he’s a devout Jehovah’s Witness). Over and over in the story, Wirt chronicles what at first looks like a good opportunity for Smith to work his way back to a secure place in the music business. And every time, he’s foiled, either by his own erratic and idiosyncratic (that’s my take, based on a reading of Wirt’s book) approach, or by people out to stick it to him for their own material gain.

The story as laid out in Wirt’s book more or less peters out around 2005, and a quick Google search yields little more information about Smith’s current activities beyond the assumption that Smith remains among the living. (Unsurprisingly, there’s no official Huey Smith web site; if there were, no doubt it would be another case of someone else making money off the musician’s name.)

Writ does take pains to sketch out Smith’s importance as a musician and composer, and to quote the many artists who claim him as an influence. Dr. John (Mac Rebbenack) is mentioned and quoted frequently, as he drifts in and out of the periphery of Smith’s story.

In sum, Huey “Piano” Smith and the Rocking Pneumonia Blues is recommended – it’s deeply researched and well-written – but potential readers are warned that Smith’s story is a frustrating, largely unhappy one. At the end of the book, Wirt suggests that Huey “Piano” Smith has come somewhat to terms with his lot in life, having found peace in his religion. The typical reader is unlikely to come away from the book feeling nearly as settled.