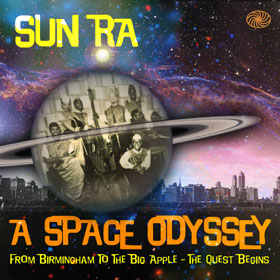 As Kris Needs notes in his excellent and detailed liner notes for A Space Odyssey: From Birmingham to the Big Apple – The Quest Begins, Sun Ra was a practitioner of “garage jazz.”

Today (May 22 2014) would have been the 100th birthday of the man born Herman Blount, though once he rechristened himself Sun Ra he also claimed to be a visitor from outer space. And when he began releasing music under his own name (beginning with 1956’s “Saturn,” credited to Le Sun Ra & His Arkistra), many listeners would be inclined to agree. Sun Ra’s closest antecedent wold have been Thelonious Monk; both men shared a love of dissonance and odd meters. But where Monk worked on (acoustic) piano and generally within a small combo, Sun Ra often worked with large ensembles and – in later years – made full use of electronics. A staggeringly prolific artist, he released more than 100 albums, many of which are quite rare today. His influence is wide: Parliament/Funkadelic owe much to him both musically and in their visual approach, and in my interviews, some surprising artists – XTC‘s Andy Partridge and New Jersey powerpoppers The Grip Weeds – have expressed their deep admiration for his work.

The new 3CD set from Fantastic Voyage focuses on the earliest part of Sun Ra’s recorded career. The first disc (subtitled “Pre-flight”) kicks off with the aforementioned “Saturn” and then quickly moves on to a survey of the session work Blount/Sun Ra did for other artists (plus some early solo/Arkistra sides). The earliest track dates from 1933, with the pianist as part of Clarence Williams & His Orchestra on the Sun Ra original “Chocolate Avenue.”

Most r&b fans will be surprised to learn that Sun Ra played on a number of tracks by well-known artists of that era: Wynonie Harris and Red Saunders’ Orchestra are just two of these. The “Pre-flight disc is packed with 28 tracks overall, about a third of which are Arkistra tracks from the tail-end of the 1950s.

Disc Two (“Lift-off”) features seventeen tracks, all Sun Ra originals, and all credited to various aggregations of his. He changes the spelling of Arkistra to Arkestra, sometimes appending the prefix “His” or “The” and other times adding “Solar” before “Arkestra.” But it’s the music that matters. Whacked-out big band music that surely seemed bizarre then (these tracks are assorted randomly from the period 1956-1968), and while they feel a bit more melodic in the context of the 21st century, they’re still pretty out-there. “Sunology” from 1957’s Super Sonic Jazz is a relatively straightforward number, but some electric piano takes it outside the safe zone. The electric piano runs on “Springtime in Chicago” seem processed somehow, perhaps through a ring modulator. But that’s a nonsensical observation: ring modulators weren’t available in 1956. Nonetheless, Sun Ra did some sort of processing – however primitive – to alter the tone of the instrument. “Sun Song” from 1957 features some otherworldly percussion, slightly off-kilter piano glissandi and weird, gurgling Hammond organ, all (perversely) applied to a relatively accessible melody. The brief solo piece “Advice to the Medics” is built around Sun Ra’s electric piano work, again with a strange, likely intentionally overdriven tone.

All of which leads to an important point. Long before the phrase DIY became a watchword in music, Sun Ra was doing it himself. Most of his recordings are relatively low-budget affairs, many released on his own El Saturn label. It’s unlikely that a relatively straight label such as Riverside or Blue Note would have wanted to release the seemingly unending stream of weirdo jazz that Sun Ra & His Arkestra churned out. And long before the era of the “merch table,” El Saturn releases were normally pressed in exceedingly small quantities (often less than a hundred copies) and sold at live Arkestra shows.

Despite its subtitle, disc three (“Future Shock”) isn’t all that weird, at least not in its first half. Fifteen tracks focusing tightly in on the period 1958-1961 (a time during which he released eleven albums!), these actually represent a sampling of the most accessible music Sun Ra produced. In some ways, Sun Ra’s music here has hints of exotica practitioners Esquivel and Martin Denny, albeit filtered through a jazz/r&b sensibility neither of those men possessed to any great degree. Even a straightforward blues arrangement on “Great Balls of Fire” (decidedly not the Jerry Lee Lewis standard from a year earlier) has atonal horn bursts peppered throughout its run time. “Velvet” is a big band number led by Sun Ra’s Monk-like piano runs; it swings hard and gives solo time to members of the Arkestra. Many of the tracks here are built upon a blues foundation, and seem designed for dancing. “Blues at Midnight” does engage in some thrilling bass and saxophone runs that lean toward hard bop, and “Ancient Aiethopia” is cinematic in its scope. “Space Loneliness” (a single from 1960) is evocative of its title, and features some excellent, dissonant piano soloing from Sun Ra. The disc tosses in a doo-wop oddity: “Teenager’s Letter of Promises” from 1959 by Juanita Rogers & Lynn Hollings backed by Sun Ra’s Arkestra masquerading as Mr. V’s Five Joys. It’s otherworldly and banal all at once, and has to be heard to be believed.

“Bassism” is just what its title suggests: a tune built around upright bass. But fluttering flutes and skittering piano take it in an uncharted direction. The Arkestra continues on its trajectory spaceward with 1961’s “Where is Tomorrow” and follows with three more tasty, edgy cuts from that year’s album The Futuristic Sounds of Sun Ra. The percussion-centric “The Beginning” feels like what Edgard Varèse might have done had he been backed with the Arkestra. The set wraps with 1961’s “Message to Earthman,” on which the Arkestra is led by a speaking (and shouting! And wailing!) Sun Ra, declaiming his intergalactic message.

Since the subtitle of this 3CD’s set includes the phrase “The Quest Begins,” one can only hope that Fantastic Voyage will grace modern music listeners with another Kris Needs-curated collection of Sun Ra music in the near future.