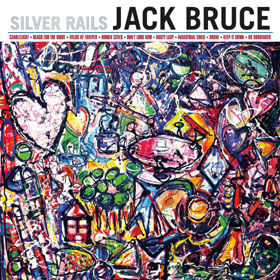 Let us consider for a few moments the current conditions of the three musicians formerly of Cream. Drummer Ginger Baker has made a career out of being disagreeable (see the film Beware of Mr Baker for proof). Guitarist Eric Clapton still tours, records and performs, but the fire has seemingly long ago gone out. But bassist Jack Bruce – the primary voice of Cream – remains busy, and – more importantly – vital. On his latest album Silver Rails, he’s in fine form, and his assured (and highly distinctive) vocals and bass hold things together.

Even though Silver Rails is populated with a long list of marquee name players (organist John Medeski, guitarists Phil Manzanera, Uli Jon Roth and Robin Trower), Bruce’s musical personality is strong enough that it’s always his show. Working with his longtime collaborator, lyricist Pete Brown, Bruce still sounds like the man who sang “Tales of Brave Ulysses.” But the music never attempts to ape previous styles. “Reach for the Night” exemplifies Bruce’s approach, with a full arrangement that features soaring tenor sax lines, crystalline piano and subtle guitar work, but that till keeps Bruce’s vocal out front where it belongs.

The lyrical subject matter seems to be a series of ruminations on the present versus the past (“Fields of Forever”). One of the few tunes not co-composed by Brown, “Hidden Cities” does in fact feel like something one might have heard on Wheels of Fire. The jazz sensibility that always lay just below the surface in Bruce’s work is applied to an arty rocker here. When Bruce gets mellow contemplative (“Don’t Look Now”) the results are a notch less successful – and his vocal seems less assured – but there’s really no filler or truly weak tracks on Silver Rails.

“Rusty Lady” (featuring Trower on lead guitar) lays down a thick slab of swaggering riffage that will remind listeners of “Politician.” And the plaintive “Industrial Child” features Jack Bruce on piano and vocal, joined only by a bit of subtle acoustic guitar work from Tony Remy. Bruce’s quivering vocal adds a layer of vulnerability. But then “Drone” heads as far as possible in another direction, with Bruce’s thick, buzzing, uber-heavy bass the only instrument other than Milos Pál‘s drums. The bass carries the song in ominous fashion; the sound of dive bombing WWII-era planes is implied throughout. “Keep it Down” (featuring Whitesnake guitarist Bernie Marsden) nonetheless strongly recalls Bruce’s 80s work with Trower on BLT and Truce. The album wraps with what is Silver Rails‘ most commercial-sounding tack, the arena-rock styled “No Surrender!”

Sacha Jafri‘s album cover art might suggest a classic jazz album, but Silver Rails is a decidedly rock effort, and a pleasingly strong one at that.