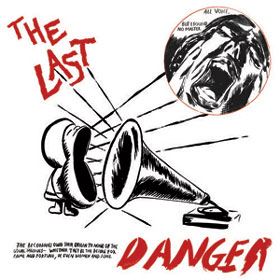 This one had me fooled. At least until I put the CD in the player. Skimming the press kit, I came way with the impression that The Last would somehow fit into the L.A. hardcore punk scene, the milieu that gave us The Germs and likeminded acts.

But what I found instead was far more interesting. Harmonies, power chords and keyboards (of cheesy 60s organ variety) were in the mix along with plenty of power chording. The Last draw on all kinds of influences: “Unreal Love” subtly hints at “Walk, Don’t Run,”  and in other places the group sounds like a giddy cross between Offspring and Redd Kross. They can sing sweetly when they want to (hint: not too often) but other times one of the brothers — not sure which — sounds a lot like The Plimsouls’ Peter Case.

The punk elements are there, most notably in the rhythm section: Bill Stevenson’s rat-a-tat-tat drumming style and Karl Alvarez’ assured bass work are forceful and propulsive. But a pair of brothers (Joe Nolte on guitar and vocals, and Mike Nolte on keys and vocals) have that sibling harmony thing happening, even when they’re sneering.

Danger is the band’s first release in some seventeen years, and while it’s nominally a punk album, it’s far too tuneful and upbeat to wear that label comfortably. Several of the songs even kick of with chiming, Rickenbacker-styled guitar work, though it generally gives way quickly to power riffage. “I Don’t Know What to Say” sounds like what might happen if Gerry and the Pacemakers went punk. Or something. “She Knows Just What to Do” feels a bit like The Smithereens. Other listeners may hear echoes of the Buzzcocks, Magazine or very early XTC.

Note:For some reason, the songs on my CD don’t seem to sync up in any meaningful way to the track listing. So I may have misidentified song titles. But whatever they’re called, they’re great songs, played with gusto. Recommended, and short-listed for potential inclusion in my Best of 2014. And it’s only May!