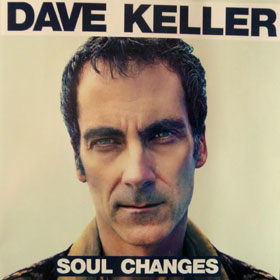 Preconceptions can be a dangerous thing. When I read the advances of Dave Keller‘s Soul Changes, I made the assumption that Keller would be the latest vocalist in a Memphis-flavored retro bag. And while he is in fact that, he’s much more. Taking nothing away from the fine singers who don’t play an instrument onstage – Charles Bradley comes to mind – Keller offers a bit more on Soul Changes. Yes, he sings in a searing, soulful style, but he also rips it up on bluesy electric guitar.

With stellar backing on the first half of the album by the Hi Rhythm Section plus Stax veterans Bobby Manuel (guitar) and Lester Snell (keyboards), Keller turns in performances that compare favorably to Boz Scaggs‘ self-titled 1969 Muscle Shoals foray. And the second half of the disc (cut in Brooklyn) features backing by The Revelations, an NYC band who truly get the whole soul vibe. The songs on Soul Changes deal with the dissolution of Keller’s marriage (“17 Years,” for example) and he successfully channels pain and despair into a album that’s visceral and emotionally charged throughout. The album was nominated for a 2014 Blues Music Award. Recommended.