Album Review: The Dream Syndicate – The Day Before Wine and Roses 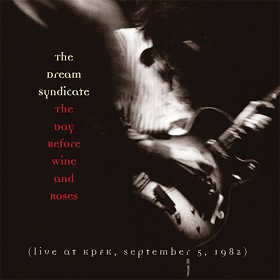 Though singer/guitarist Steve Wynn introduces this set to the audience as a set of covers, this KPFK broadcast is balanced between covers (Bob Dylan, Donovan, Buffalo Springfield) and Dream Syndicate tunes. A wiry, distorted, edge-of-mayhem set, it captures the intensity of a Dream Syndicate show of the era, just before their major label debut (1982’s Days of Wine and Roses, hence the title of this release). A few of these tracks appeared previously on the 1992 Tell Me When It’s Over best-of compilation, but the remainder had previously only been issued on vinyl in Germany.

Though the group’s studio debut was an organic document itself (recorded in a single evening), this live show is perhaps an even more faithful documenting of the band’s power. They’re clearly having fun: some sly in-jokes can be found on this live broadcast, including a quick quote of a well-worn U2 riff.

Wynn’s new liner notes make clear the historical importance of the show, and lays bare some of the band’s influences. The Day Before Wine and Roses is another in Omnivore Recordings’ series of fascinating reissue/rescue efforts, and is essential listening for Dream Syndicate fans (especially those who dig their more unhinged live material).