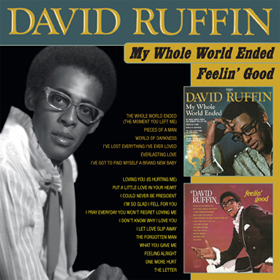 Sure, everybody knows The Temptations, and their many hits, including “My Girl,” and “Ain’t Too Proud to Beg,” both featuring lead vocals of David Ruffin. But fewer – especially those who followed the pop charts rather than the R&B one – are familiar with Ruffin’s solo work. This set pairs Ruffin’s first two albums (both 1969) in his (first) post-Temptations period. The vocals are peerless. The arrangement and playing on these sides is first-rate: all of the elements that made Temptations singles tunes for the ages are present one these records as well.

While My Whole World Ended is a near-concept album in its depictions of hurt and loss, Ruffin’s expressive vocal work brightens the often downbeat lyrics. His reading of “Everlasting Love” is arguably the best-ever version. Feelin’ Good is, as its title suggests, a bit more hopeful, and is very nearly as good. If you love the Temptations, you’ll love these (inexplicably) long unavailable albums. Kudos to Real Gone Music for rescuing these classics. (Another new RGM twofer pairs 1973’s David Ruffin and Me ‘N Rock ‘N Roll Are Here to Stay from 1974. It’s also good, but if you must chose one, pick this.)