This week, I’m quite busy attending Moogfest 2014 here in Asheville NC, the adopted of hometown of both myself and the late Dr. R.A. Moog, for whom the five day event is named. I hope and plan to bring extensive coverage to this blog very soon. In the meantime, here are some shorter-than-usual reviews. Please note that the relative brevity is in and of itself no comment on the quality of the (uniformly excellent) music.

Last Saturday was Earth Day. It was also Record Store Day. As RSD has grown in popularity – I read multiple reports of long waiting lines outside independent record shops across the country – there has been an associated increase in RSD special releases. Most notably (though not always) on vinyl and in exceedingly limited quantities, these releases are also often noted for the quality of the music they contain. Today and tomorrow I’ll review my favorite. 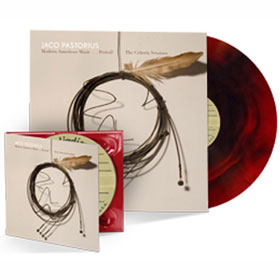 Jaco Pastorius – Modern American Music…Period! The Criteria Sessions
The young wonder that was Jaco seemed to burst onto the scene fully formed. A revolutionary bassist, Pastorius went on to gain great fame as a member of Weather Report, and then – not too many years later – suffer a fatal flame-out, a story that included mental illness, homelessness and deteriorating health. But while he lived, his muse shone brightly, and even before he became so well known, he had created enduring works. This collection of material brings together a great deal of previously-unreleased material, most of it dating from 1975 when he cut demos at Criteria Studios in Miami. A mix of original and cover material (including some by Charlie Parker, an oft-cited influence on the bassist), the set previews material that would surface on Pastorius’ proper debut, his self-titled 1975 LP. By definition less “produced” than the trackso n that set, these demo recordings nonetheless feel full put together. Other than percussion support and Alex Darqui‘s piano and Fender Rhodes, it’s all Jaco all the time here, on electric and upright basses and some more Rhodes. The sound feels a bit muffled throughout – this is a demo, and it is bass, after all – but it’s an eminently listenable set. Pastorius’ lightning runs up and down the fretboard are the highlights here. If you don’t like “busy” bass playing and think bass players should stick to the root note, stay far away from Modern American Music…Period! But if you’re unfamiliar with Jaco yet dig Frank Zappa‘s 70s fusion forays, you’ll find a lot to discover here.