Moogfest Preview: The Volt Per Octaves 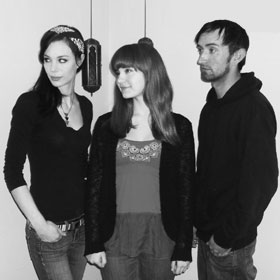 The original idea for Moogfest came about while Dr. R.A. Moog (“Bob” to everyone who knew him and many who didn’t) was still among the living. Originally a smallish New York City-based event, it was initiated to commemorate the 50th anniversary of the company that bore the man’s name. Moog Music had been at the cutting edge of music since its inception, and though the company effectively went away for a number of years after Bob Moog left it, the company he founded after moving to Asheville (originally called big Briar) reacquired the rights to the Moog brand name in the early part of the 21st century.

The first Moogfest was a single night, and featured many of the biggest names associated with Moog instruments. By the time the second Moogfest rolled around, it had already begin to grow. It was around that time that an unsigned band from the west coast won a competition, the award of which was the opportunity to travel to open at Moogfest. That band – The Volt Per Octaves – was named after an electronic measurement credited to Moog, and initially featured husband and wife duo Nick and Anna Rhoney Montoya. The couple have known each other since they were fourteen, and Nick got into synthesizers when he was in high school. “I got my first Moog when I was about seventeen,” he recalls, “and I fell in love with it.” Nick and Anna became a couple in life, but didn’t collaborate musically until some seven years later. When they did, their goal was, Nick Montoya says, “playing vintage synthesizer music live, without samples or loops and computer. Just playing. With our fingers, and our toes, sometimes.” Their early influences included Air, The Moog Cookbook and other retro-minded projects as well as Aphex Twin and other more modern sounds.

That 2005 performance at BB King’s in NYC led to an endorsement deal with Moog Music. In the intervening years, Nick Montoya became an authorized service rep for Moog out west. In summer 2013 Nick and Anna and their daughter Eva relocated to Asheville, where all three now work in various capacities for Moog Music.

Mere days after Nick landed in Asheville, he posted a Craigslist ad offering his services on electronic pianos, an area of expertise above and beyond his synth-related technical prowess. I had just scored a very good deal on a 1973 Fender Rhodes Mark I piano in fairly rough condition. I made an appointment with Nick, and he came over a day or so later, tools in hand. Together we more or less disassembled and rebuilt the keyboard, though I should point out that my involvement was (wisely) limited to following simple, straightforward and explicit instructions. (I’m not very technical.) Within a couple of hours, we had restored the Rhodes to something not far from factory condition. Several months later Nick performed a similar act of resurrection on another of my thought-lost keyboards.

But though those happy episodes were my introduction to Nick, all of that is secondary to the music.

While there are certainly some big names – some really big ones, like Nile Rodgers and Chic, Keith Emerson, Kraftwerk, M.I.A. and many more – to me, The Volt Per Octaves are the sort of quintessential heart of Moogfest. They actually play Moog equipment, even. Nick and Anna play all manner of synths, while Eva Montoya provides additional synth and percussion and operates something Nick describes as “a robot thing called a Thingamagoop.” She also, chuckles Nick, “jumps around a little bit.”

While some might argue (and I’d guardedly agree) that in recent years Moogfest strayed a bit from its core concept, the 2014 event looks to be much truer to the spirit of Dr. Bob. A veritable teach-in, the five-day event will include talks by synth/electronic music pioneers whose names adorned some of the most forward-looking equipment of the electronic music era: Roger Linn and Tom Oberheim, to name but two. And all manner of talks that explore the nexus between technology and modern life are a big part of the festival. But the band that “traveled 3000 miles to play two songs” at Moogfest 2005 will enjoy a more prominent – and longer – performance at Moogfest 2014 here in Asheville.

Stay tuned for extensive Moogfest coverage on the Musoscribe blog.