Ask Me Some Questions: The Graham Parker Interview, Part 3

Bill Kopp: As the new Ask Me No Questions documentary points out, you parted ways with The Rumour after The Up Escalator (1980), but with the exception of Another Grey Area (1982), you pretty much continued to work with guitarist Brinsley Schwarz on many of your recordings. What was it about him that led you to keep using him but not the other guys in The Rumour?

Graham Parker: I’ve never really been able to answer that questions, really. Actually it was him and Andrew [Bodnar] on the bass as well. They continued on quite a lot of stuff. If you think of The Mona Lisa’s Sister [1988] – which was quite a radical record for me, production-wise – I had gotten fed up with all these 80s-sounding producers, and wanted something with as few instruments as possible. I had never really done that, and I pulled off something quite different, I think. Brinsley and Andrew were part of that, and they were on the road with me. So we did quite a lot together. 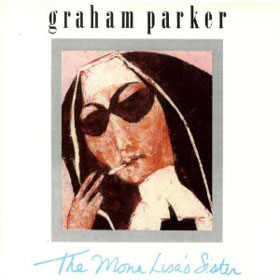 But I don’t really know the answer; it just seemed to fall into place without me thinking about it. Brinsley is a foil for me; he can take off the rough edges a bit. Martin [Belmont], as a guitarist, is sort of rough-edged. He’s a brilliant guitarist, and he actually played some incredible guitar on Howling Wind. That’s a lot of him playing the lead on songs like “Don’t Ask Me Questions.” Much more than people think. But he’s got that incredible intensity: Martin cannot lay back. Brinsley adds a dimension that real counts against what I do. So it seemed normal and natural to me; I don’t know how it happened, but I just started talking to Brinsley, and I said,”I want you to help me with The Mona Lisa’s Sister.” He was also on Steady Nerves [1985].

Also, some of the guitarists I was finding myself working with via producers like Jack Douglas on Another Grey Area, I didn’t think they were quite right for me. I didn’t think they had enough individuality in their playing; Brinsley has great individuality. So he has both of those things: a style that can smooth of some of my edges, making a very nice balance, and also individuality as a player. But it’s only now looking back and analyzing it that I can see why I did it.

BK: You mentioned about the 80s sound on some of the records. For me, the only one that really has what I’d consider “dated” production is the one that has “Break Them Down” on it…

GP: Steady Nerves, yeah. That was around the time I was saying, “Oh, I should be my own producer.” But I didn’t really have the guts to do it completely. So I got this guy Bill Whitman, who had engineered the She’s So Unusual album by Cyndi Lauper. And if you think of the sound of that, it personifies the 80s. Not that it wasn’t good; it was very good. He had done that record, and he was in that mode. There was no shaking him out of that. And I went along with it, because it was what you did then. You made an absolutely enormous drum sound, and all the instrument had a load of reverb on them. Everything was drenched in that sound. And that one’s definitely a culprit.

And that’s why I went radically against it with The Mona Lisa’s Sister. I really wanted to do the opposite. Although, if you listen to “Start a Fire” now, you could very well say, “That sounds very 80s.” The difference is, there’s one acoustic guitar doing the rhythm on a sort of disco beat song. Which is sort of unusual; that song is on a lot of alternative [compilation] records. But on that record, I stopped at four instruments: “We’re not gonna double the guitars.” That’s what you did on 80s records; if I played a rhythm guitar on Steady Nerves, the producer would say, “Double it.” So then you’d play what you did again, and they’d copy it. Because it made everything “bigger.” But in hindsight, it made everything smaller, in a strange kind of way. It squashed it with lots of treatment, lots of reverb. And that kind of production really canceled out the rock’n’roll element. It did so very effectively. And we were all guilty of that. We were searching for a bigger sound, but what we were getting was a louder sound. So it was very good to make The Mona Lisa’s Sister, and even better to make Struck by Lightning [1991]. By then, everything was much more grassroots again. There are a couple of tracks on that one that are overdone with production, but mostly, it’s back to the roots.