Ask Me Some Questions: The Graham Parker Interview, Part 1

Once pegged as one of rock’s angry young men, these days Graham Parker is neither angry nor young. And while his profile these last few decades has been lower than in his commercial heyday (1976 to the mid 80s, and even then only a modest commercial success), Parker has continued to release a remarkably consistent string of albums that are true to the virtues he’s long championed. As he sang on his (best) album, 1979’s Squeezing Out Sparks, “Passion is No Ordinary Word.” But it’s a word that aptly sums up Parker and his music. As he told an NME interviewer in 1979, “All I want to do is send a shiver up people’s spines.”

Bursting on the scene in the late 70s, Parker thrilled critics but confounded the marketplace; was he a punk? Was he part of the then-nascent UK pub-rock scene? Was he part of rock’s heartfelt old guard (Bruce Springsteen, Van Morrison, Phil Lynott)? Or was he – as the odd passerby still sometimes asks him – Gram Parsons?

A new documentary film, Don’t Ask Me Questions attempts to answer these and other burning questions. And it does so with the full and enthusiastic cooperation of Parker, who – surprisingly to those taken in by his angry persona – happily fields queries, reggaefied song titles be damned. Luckier still for me, he is happy to answer my questions as well.

Bill Kopp: When you were first approached about the film Don’t Ask Me Questions, what was you reaction? Were you skeptical? Suspicious? Enthusiastic?

Graham Parker: It was in the late 90s that I met them. I was doing a gig; I remember it specifically. It was something for the Long Island Brewing Company. I don’t know why I remember that, because there’s a lot of gaps in my memory! But that’s when (director/producer) Michael Gramaglia and his brother approached me. They had done the Ramones film, End of the Century. And I said, “Well, that’s a story: The Ramones.” It’s sort of Shakespearean, y’know. I said, “You won’t get much material from me. It’s boring, really.” But they didn’t really believe that.

It took a couple of years. I’d just put them off, really. I told them, “I just don’t think there’s the material there. I don’t think it’s worth it.” It would be a lot of trouble for something that would just be…a flop. I didn’t have any confidence in it. 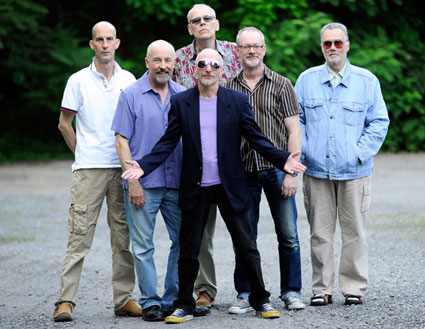 In 2001, I had this short story book, Cod Fishing on Valium published. And I thought that was quite an exciting thing, that I’d got St. Martin’s Press behind it, and a literary agent who loved it. It was going very well, and then I did a little tour promoting the book, reading bits of it. And playing songs specifically written for the stories, which is a very gutsy, unusual sort of thing to do. I did about eight to ten gigs like that, mostly in the Northeast.

I called them up and said, “Why don’t you do a film about this?” And of course then I had opened the door. Once you open the door, all bets are off. So from then it just kept going. So every year, a few times, Michael might film a bit of me, come to a studio, do an interview. So now he’s got tons of footage of stuff that didn’t make it [into the finished film].

It just went on like that. That’s why it took so long. Filmmaking can take many, many years. And it was really finished…until I went and dropped the bomb. I’d done it: I’d re-formed The Rumour. And I was going to be in this Jud Apatow film [This is 40]. The documentary was finished; we’d already had a screening in New York. Three of The Rumour came, and we had all these [Kickstarter] donors. And suddenly I dumped this [reunion project which culminated in the release of 2011’s Three Chords Good] on them, and so it wasn’t finished at all.

But then [Gramaglia] had the finish he wanted; he had always wanted something dramatic. And I had been telling him, “It’s not gonna happen.” I don’t work on plans; I work more on whims, really. But we got a more satisfying finish for the film.