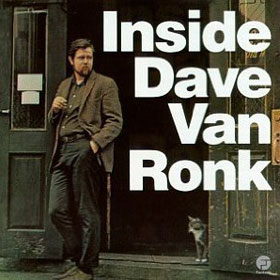 I’m not a folkie. When it comes to acoustic based music of the folk sort, my tastes are fairly limited: I own a decent-sized stack of Bob Dylan albums, that cat-chewed first Peter, Paul and Mary LP I got from my parents’ collection, and a few Phil Ochs albums. And that’s about it. I prefer the British Isles/European folk styles of Bert Jansch, Richard Thompson, and, well, Donovan.

But I’ve long been familiar with the name Dave Van Ronk, albeit only on a surface level. What I knew of him could be summed up in a sentence or two at most: he was part of that whole Greenwich Village scene, along with people like Rambin’ Jack Elliott. I had never heard a note of music by either of them, though. Still, when the Coen Brothers movie Inside Llewyn Davis was released, and I started hearing Van Ronk’s name more often, I figured it was time to give a listen. (The film takes some of its cues from Van Ronk’s life, I’m told; I haven’t seen the movie.)

As it happens, Concord Music Group, owner of the Fantasy back catalog, shrewdly chose right-about-now as the time to reissue Inside Dave Van Ronk, on vinyl and CD. So availing myself of a copy, I sat down to take in some folk. But first, I turned to my trusty and well-worn copy of the seminal rock-crit treatise, Lillian Roxon’s Rock Encyclopedia. Wrote Ms. Roxon:

In the sixties, an age of lyric tenors, falsettos and angelic boy singers, Dave Van Ronk, who sings like a combination truck driver-lumberjack, seems strangely out of time and out of place. But if you’ve ever heard him after an evening of Judy Collins–Joan Baez sweetness, and if you’ve heard what he does with Joni Mitchell‘s “Both Sides Now,” giving it the gritty third dimension of a man who’s been there, then you know his time is coming.

Roxon was prescient about a lot of things, but Van Ronk’s time never truly did come. Or maybe it did. While he never shifted a whole lotta units, this was folk music, after all. But he was a respected, revered figure in the folk world, and his twenty-or-so albums are highly regarded within the folk idiom. Allmusic.com rates several of his albums as four-to-five star releases, and not a single rated one is less than three stars.

He began his recording career in 1959, and his fourth LP (recorded in early ’62) was released in 1964 as Inside Dave Van Ronk. On the record, Van Ronk performs unaccompanied acoustic guitar readings of a dozen tunes, all traditional numbers. And to the first-time listener, he sounds a bit like an American version of Nick Drake, albeit with a much gruffer voice and a simpler approach on the guitar. The choice of English folk tunes (“Fair and Tender Ladies,” to name one) alongside more recognizably American ones (“Kentucky Moonshiner”) heighten the similarity.

The Fantasy reissue isn’t a straight reissue f the original LP; no, it also includes the LP Dave Van Ronk / Folksinger (recorded in April ’62 at the same time as the Inside tracks, but released in 1967; go figure). It’s a mix of traditional tunes with some more modern numbers. So the CD features 25 tracks.

The two albums are very much cut from the same cloth, and it makes good conceptual sense to reunite the music all into one place. His reading of Reverend Gary Davis‘ “Cocaine Blues” is more rough-hewn than Drake’s version (included on the bootleg Tamworth-in-Arden). But it honors its source relatively faithfully. Van Ronk plays guitar and sings on the Folksinger tracks; he switches to the more expressive 12-string for Inside, and adds a bit of dulcimer, autoharp and harmonica as well. All the tracks are spare and unadorned, and sound like what they probably are: recordings made in a single pass, with Van Ronk pulling songs from his own repertoire and playing them the same way he would at a Village coffeehouse.

If that description sounds appealing, you’ll likely enjoy an hour-plus of Dave Van Ronk as presented on this set. The music makes no pretense to be anything more than it is: Van Ronk’s not musically arguing for the timelessness of these folk tunes. He’s merely presenting them for you to react however you see fit.