A Conversation with The Tubes’ Founder Bill Spooner, Part Four

“No one would get my wheelchair.”

Bill Kopp: We’re talking about the songs on The Tubes‘ 1977 album Now, and whatever comes to your mind about each of them. Side Two continues with “I’m Just a Mess.”

Bill Spooner: That’s a Roger [Steen] song. He came over to my place when I lived in an apartment in Pacific Heights, and we made a little [demo] version of it on a four-track reel-to-reel. Everybody liked it; it was a really unique song. Unique chord progressions. But with Roger’s songs, you’re never really sure what they’re about. He talks in metaphors. A strange guy; he’s not weird-strange, but he has a strange way of saying things. But it doesn’t matter what it’s about. Some songs are message songs, and some are more melodic experiments.

BS: That was a Jane Dornacker song. And I think Captain Beefheart played saxophone on it, too. Some wacky sax. I just thought it was a funny song: “I’m not Cathy / I’m Cathy’s clone.”

BK: What possessed you guys to cover Lee Hazlewood‘s “This Town”?

BK: It has that whole Vegas thing about it… 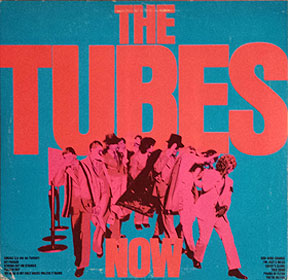 BS: That’s how we did it on stage, too. But we didn’t do it very long onstage, because…a lot of stuff, we’d do trial runs to see if it was going to work. And that one really didn’t work. People just didn’t get it. You can get a pretty good read from the audience. We had street sweepers onstage, kind of Frank Sinatra streetlights. And Fee [Waybill] had a kind of Sinatra outfit on. We had a conveyor belt on the back of the stage, with various New York archetypes going across it. And a film, too.

BK: No wonder you never made any money!

I’ll tell you a quick story. We had a song called “Dinosaur Blues.” This was very early on. We were playing at a club called The North Beach Revival, I think; a place in San Francisco. Now, there was this costume…and I’m not a costume maker. But I made this costume for Fee. What it was, I took oil cans and flattened ’em out, and made ’em into a Stegosaurus tail. All the way down his back and out. And I gave him some little fake claws for hands. He was a kind of cross between a Stegosaurus and a Tyrannosaurus Rex. And he said, “What? Aren’t you going to paint this or something, make it green?” And I said, “Nah, just leave ’em as oil cans. That’s where the oil comes from, right?” “Yeeeeahh, but…”

So, being a good sport, he tried it. And we did it, and that didn’t go over. 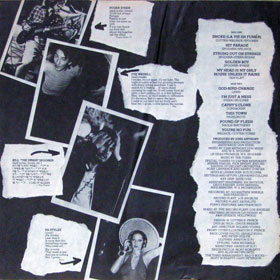 Another one we tried was “Baby, Your Face is Mutated,” which got released eventually.

BK: That’s on Dawn of the Tubes.

BS: For that one, we had these horrible masks made out of urethane foam. Blobbing, melted faces. And by the time that song was done, there was only one person left in the audience. There was this one girl sitting there. So I went over to her, and I said, “Y’know, I realize that song’s a little raw, and the costumes are a little strange, but I want to thank you for staying. I’m glad that someone stayed all the way through.”

And she said, “No one would get my wheelchair.”

I knew right then that song was never gonna cut it.

BS: “Pound of Flesh” was a Ron Nagle song. I don’t think that one really…it came out all right, I guess. But in the grand scheme of things, it was not a good choice. That’s about all I could say about it. Wasn’t one of my favorites. 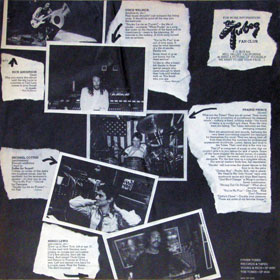 BK: So what happened to the remainder of the material originally planed for the double-album that never was?

BS: Some of them became part of Remote Control, with different words. And some of them never got finished. It was just too much. When it came time to do another album, the last one had left a bad taste, so we didn’t really want to dwell on that material.

BK: the last track on Now is “You’re No Fun,” a very Vince Welnick-sounding kind of song with all those piano glissandos and everything.

BS: It was also kind of early Tubes and Beans-esque. A lot of pounding rock, but piano rock. Mike Cotten might have written the lyrics to that one; I’m not sure who he was referring to. It could have been me, for all I know.

Mike was really emerging as a songwriter back then. He was, and still is, a very smart guy. So it was inevitable that he would start writing songs. But when he first started with us, he was an artist; we grew up with him in Phoenix. He hung around with the band, but he didn’t play anything. And he absolutely refused to go onstage. And then some relative of his died…this is a strange story. They left him some money; I don’t know, maybe $10,000. And he was going to buy a Bolex movie camera. And we said, “Naah, Mike, you don’t want to do that. Buy a synthesizer!” And he said, “What am I gonna use that for?” “You can make squealing noises! Wacky spaceship-taking-off sounds!” “Where would I do that?” “Do it onstage with us!”

So he did break down and buy an ARP 2600. But for the first two years, he wouldn’t play it onstage. He’d sit out at the mixing console and do it from there. I can’t remember when he had the final breakthrough and got him to actually appear onstage with us. But pretty soon he was up there dancing, and spinning his console around. And then he started singing! So it was just a matter of time before he was going to be a songwriter. I knew he would. And he’s a good songwriter, too.

That wraps up our discussion of the Now album. In Part Five, we’ll cover some other odds and ends about The Tubes’ career, including a discussion about the documentary film that’s in development.