A Conversation with The Tubes’ Founder Bill Spooner, Part Two

“Can’t you control your bitches?”

Bill Kopp: If you don’t mind, I’d like to run down the track lists of the Young and Rich and Now albums, and just get whatever comes to mind from you for each song. As much or as little as you would care to say. First track on the 1976 record: “Tubes World Tour.”

Bill Spooner: I liked it. It was obviously written about The Tubes going from place to place, but it was kinda written about my cousin, who was a poet in Paris. The lyric included some sort of French slang that means, “you’re cool” or something. The rest of it was silly stuff about going from town to town. Blowing our own horn about how great we were.

BS: That was a really, really old song. That song is from before The Tubes, really. First there was a band called The Red, White and Blues Band…

BK: And then there was The Beans…

BS: Yeah. And “Brighter Day” was a song from the early days of The Red, White and Blues Band. The Beans played it for a long time, and then it didn’t make it onto the first Tubes album, but [producer] Ken Scott liked it, and we did it.

BS: There’s a book called A Walk on the Wild Side by Nelson Algren. They made a really crappy movie out of it, but the book was awesome. It was kinda my manual for life for many years. And that what “Pimp” is about.

But the main line, “Pimp, can’t you control your bitches?” That’s a good story. We used to haul all our shit around in a big box truck, a rented truck. It was parked in front of the house of one of our roadies, who lived out by the park in San Francisco. We were going to a gig, so we went in to pick him up. This was in the early, early days. 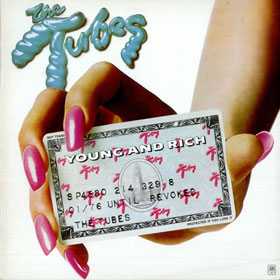 There were these two black kids – they must have been ten or twelve – messing with the lock on the back of the truck. I yelled, “Dudes! What are you doing?!” They said, “We’re just checkin’ to make sure your lock is okay,” they said. And then, “Give us a ride! Give us a ride!”

So – being the hippies that we were, and thinking that the kids were gonna rob us – we did. And on the way, one of them says to the other, trying to be real cool, “Can’t you control your bitches?” Little kids, y’know. And I thought, “Now, that’s a good line.” From our ten-year-old, would-be robbers.

BS: That was written by a fiend of ours, Ray Trainer. He lived in Arizona, and he was a very troubled musical genius. He could play about twenty instruments. Bass, violin, clarinet, saxophone…if you gave him a half an hour, he could play it. He was kind of a sociopath: quick-tempered, fights. He shot his girlfriend! He had problems. I think he’s dead now. He was a really good songwriter, and we always liked that song.

We did part of another one of his songs. On the first album, “Up From the Deep,” there’s a part that used to be called “Where Are You, Rudy?” It was an instrumental that he wrote.

BS: That came from Jane [Dornacker] and Ron Nagle. I don’t know if Jane was still with us when you saw us.

BS: She had a comedy/dance troupe called Leila and the Snakes. This was around ’75. They were good dancers, and very funny. And we thought, “Boy, these people are perfect.” So we just hired their whole act, and incorporated it into ours. Eventually she decided she wanted to do her own thing, so she left the group. But she wrote that song. She wrote a lot of great songs. She was a really fine songwriter.

BK: One of my two favorite songs on the album, “Slipped My Disco.”

BS: That was about me and my bad back. And the big disco craze of the mid-to-late seventies. I just thought it was a funny way to riff on all of that. 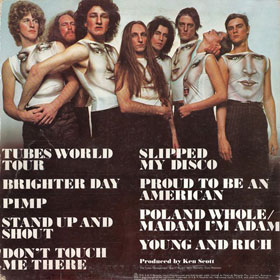 BK: One of the things I like about it is that while it’s sort of about disco, you’re playing a jazz guitar riff.

BS: I like the harmonica part that Roger Steen plays on it. It’s a whiny, melancholy sound of pain.

Another interesting thing about that song…Deniece Williams, do you remember her?

BS: She sang on “Slipped My Disco.” And at that stage of her life – in her early 20s – she was super religious. She’d read her bible between takes. I guess she thought that would keep the Devil away because of the stuff she had to sing.

BK: So that’s her in the background?

BS: And on “Pimp,” singing about pimps and bitches: “I don’t feel comfortable singing this stuff.” She had an awesome voice, though. “Just sing it,” we said. “We’re not serious, y’know.” Actually, “Pimp” was pretty serious, but I didn’t want her to know that. 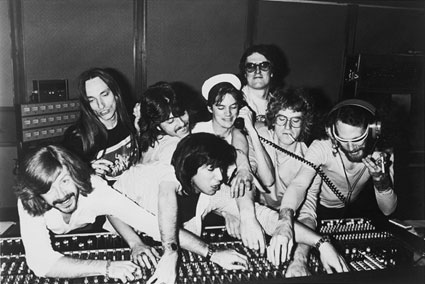 BK: And then my favorite song on Young and Rich, “Proud to Be an American.”

BS: There was a guy in town in San Francisco; his name was Satty, with an umlaut. That’s not his real name; his real name was some German name. But that was his “art name.” And he really liked The Tubes; he thought we reminded him of cabaret. And the concept of cabaret is “as above, so below.” So if you have something funny, something light, you have to have something dark. And to make one song as different as possible from the next. And that’s what we tried to do with that song.

BS: “Poland Whole” was another old Roger [Steen] song, and it was only about a minute long. And “Madam, I’m Adam” was a play on words about sex. We had a chorus for “Madam, I’m Adam,” but there really weren’t any verses. We messed around with it, and finally, at the last session before the bigwigs from A&M were coming to see us, and then quickly I scribbled down a bunch of crap about a Broadway musical with God as the director, Fee [Waybill] as Adam, and Re [Styles] as Eve. What’s really amazing is that the first reading that Fee did was the one that we used. He kinda stumbled on one word, – “wr-wr-wreck your career” – and he said, “I gotta fix that.” I said, “No no no no no. That’s awesome. We’re keeping that.” A last-minute thing that worked.

Usually the way I wrote songs is that I write a chorus, and then that gives me some sort of direction on what the verses are supposed to be.

BK: And then the last track on the album, the title cut, “Young and Rich.”

BS: We had this house in San Francisco on the Avenues out by the beach. It’s pretty foggy, cold and dark out there. And we rehearsed in the garage-basement thing. And there was just one light bulb hanging from a string. I thought it would be cool if we put a shade on it, but that didn’t work; we kept running into it. So out of extreme poverty and food stamps, and daydreaming about a brighter future, came that song.

Coming in Part Three: a track-by-track discussion of the songs on The Tubes’ 1977 album Now, reissued with Young and Rich by Real Gone Music.