A Conversation with The Tubes’ Founder Bill Spooner, Part One

“No titties in the Twin Cities.”

Customarily, I try to keep up with the interviews I do. Unfortunately, one fascinating interview has gone un-transcribed for more than a year and a half. In connection with the 2012(!) release on Real Gone Music of a pair of Tubes albums (Young and Rich from 1976, and 1977’s Now), I interviewed Bill Spooner, founding songwriter and guitarist with the band. In addition to discussing the band’s career arc in general, and the stories behind the albums, he was kind enough to share track-by-track reminiscences. Here, belatedly and with deep and sincere apologies for that delay, is that conversation. – bk

Bill Kopp: Though released only a year apart, these two albums are very different. Lyrically, Young and Rich leans a bit more in the direction of comedy and satire, with 50s pastiches, disco and so forth. To my ears it’s almost a slice-of-life, “Tubes look at America” concept album. Did you approach these albums with any sort of overarching concept, as you did on Remote Control and (to some extent) on Completion Backward Principle? 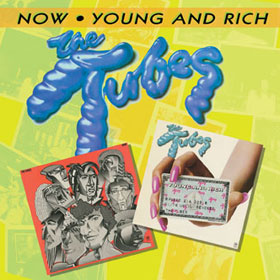 Bill Spooner: No concept. Just a collection. The only concept album, truly, was Remote Control. Everything else was just a bunch of songs, and we tried to find something that united them into an album. That used to be important; I don’t think anybody cares about that any more. Maybe Neil Young does.

BK: A friend was in the car with me while the Young and Rich CD was playing. He commented that it sounded like Frank Zappa. What sort of artists of that era do you think informed and influenced your work?

BS: In the Young and Rich era? As far as I was concerned, I was pretty much wrapped up in my own world. We used to rehearse seven hours a day, six days a week. Basically, I didn’t really have time to listen to what else was going on. I liked Stevie Wonder back then, and I liked Zappa to a certain degree; the earlier stuff, at least. But [Captain] Beefheart…I guess he was a pretty big influence.

BK: Of course! You covered one of his tracks, and he’s on one of your songs…

BS: On Now, yeah. He kinda comes under the heading of, “You never want to meet your idols.” And Zappa heads that list. But Beefheart was just crazy. I respect him as an artist, but he was a real crazy mother, I tell ya.

BK: I saw a documentary on the making of Trout Mask Replica, and they interviewed some of the guys in The Magic Band. That made him seem as if he was a sociopath.

BS: He was pretty crazy. He wasn’t like violent crazy, but you really couldn’t predict what was going to come out of his mouth. And it was very hard to work with him. Because he’d find the most absurd reasons to not do what he was supposed to be doing. I could tell you some stories, but I don’t want to get into that. 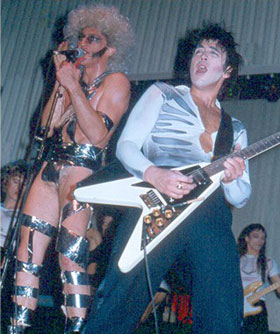 But the answer is, we were really just trying to refine our “thing.” By the time of the second album [Young and Rich], we were touring a lot. A third of the songs – or maybe forty percent – were older songs that were rejected from the first album, but [producer] Ken Scott liked ’em. So…

That’s what you sometimes do: you let the producer pick the songs. If there’s something you feel really strong about it, you agitate for that particular song. But in general, I think Ken Scott picked most of the songs for that album.

And he was a great producer. Very even-keeled. So was Al Kooper; I liked ’em both.

BK: Really? Because on the What Do You Want From Live album, on the song “I Was a Punk Before You Were a Punk,” the lyric goes, “the producer we got was a jerk.” I more or less assumed that was autobiographical…

BS: No, no, no. I just used that line because it rhymed with “work.” Limited rhyme schemes, y’know. Ya gotta go with what fits.

No, he wasn’t a jerk. They both had idiosyncrasies, but they were both very good producers, I think. In different ways. Al Kooper was like the musician-producer, and Ken Scott was like an engineer-producer. He could hear a squeak that nobody else could; he’d stop everything in the middle of a session: “What’s that squeaking sound?” And we wouldn’t hear any squeaking sound. Finally, we’d find that it was someone’s stool that they were sitting on, twenty feet away from a microphone. But he could hear it. He had great ears, and he was a really good engineer.

BK: I saw The Tubes three or four times in the early 80s, and then once in the mid 1980s with David Killingsworth taking Fee Waybill‘s place as lead singer…

BS: [deadpanning] That must have been a thrill.

BK: I’ve always been impressed by the playing and arranging on Tubes albums. Some people would argue that the visuals, the show, they lyrics etc. overshadowed that to some degree; I don’t think the causal listener often stopped to notice just how great the band was musically. Do you think that the band got its proper critical due musically?

BS: Well, you have a good point there. But I think that because we started with such a dramatic flair, as time went on we realized that we were always going to be in the red. We’d book tours – 150 dates of sold-out shows – and still lose money. Because of all the people we’d drag around, and all the props and extra trucks full of shit.

So finally we dumped the show, or at least pared it way down. And then it was a case of, “You can’t keep ’em home after they’ve seen ‘Paree,’” y’know? We didn’t get the same reaction. We’re obviously the same musicians, so it was a combination of the two things that made it popular.

You’ve got to remember: it was the 70s, and we were at the cutting edge of outrageous stage behavior. Which would be nothing, today.

BK: It would be considered relatively tame now.

BS: It would be R-rated today. But back in those days, we used to bank on that, too. I remember – you’ve probably heard this story – in Minneapolis, some women’s group or some citizens’ group were protesting our show coming to town. [According to them,] we debased women, and we had actual sex onstage…that kind of crap.

So what we did was get our three girl dancers, and dress them up in old-lady costumes, grey wigs and baggy dresses, and they showed up with signs that read, “No Titties in the Twin Cities.” So we protested our own show. And that made the local news. As a result of all that, we got the mayor, the governor of Minnesota, and the whole city council…they all came to the show. Because they had to see what was so terrible. And they loved it.

BK: Of all the Tubes’ albums, which would you say is your favorite?

BS: I really like a lot of the Love Bomb album. I don’t like all of any of the albums, but I like a lot of that one. The first one had a lot of great stuff on it, great orchestral arrangements by Dominic Frontiere. I thought it was pretty impressive for a first album. But I couldn’t pick a favorite; it’s like your kids, y’know? Even if you do have a favorite, you can’t tell anyone.

BK: The liner notes for this twofer reissue completely ignore the existence of Remote Control; they suggest Now was the last studio album you did for A&M.

BS: Who wrote the liner notes?

BS: Yeah, I think I saw something like that on Wikipedia or something…

BK: Maybe that’s where he found it. Can you tell me: the unreleased “Black Album” – also known as Suffer for Sound – was that done while you were still under contract for A&M? Where does that fall in the Tubes chronology?

BS: There was supposed to be a renegotiation period…I guess it’s illegal to negotiate with a label when you’re already on one. So we had heard rumors from our manager – Rikki Faar, who’s not the most scrupulous guy in the world – that if we got off A&M, we could get a much bigger deal with Capitol. But I think the point of that project was to make a collection of demos. When we actually made an album, we spent a lot of time getting everything thought out perfectly; we didn’t spend that much time on [the “black album”]. Stuff was a little out of tune here and there…

We figured it was kinda dark, too. It was kind of a…there are a couple of songs on there I like, but the majority of them are throwaways. I’m sure the point was to get off of A&M, because we didn’t think they’d put it out. And they didn’t.

BK: Not to wander even farther into the weeds, but this question has always nagged at me. I have a bootleg of a studio version of “Show Me a Reason.” The live version on What Do You Want From Live sounds exactly the same, just with some crowd noise. And I’ve never seen a set list that included it. Is that an actual live track, and did you ever perform it live?

BS: I don’t remember ever recording that one in the studio, so it might be the other way around, that we took the recording off of the live feed. Maybe we did; I don’t remember. I mean, we recorded a lot of crap. A lot of songs didn’t make it onto albums. We did a version of “Satellite” with another producer that nobody else liked, but that I did like. A big name producer whose name escapes me at the moment. Some of those made it onto flip sides of singles.

BK: There’s some good stuff on Tubes b-sides. It’s never been released anywhere else, but I love the live version of “Sports Fans.” I think it’s better than the studio version.

BS: A little more energy, I thought. Another b-side that I liked was “Keyboard Kids.”

Coming in Part Two: a track-by-track discussion of the songs on The Tubes’ 1976 album Young and Rich, reissued with Now by Real Gone Music.