The first record was self-produced; for Glow & Behold, the band chose to work with Chris Coady, who’s worked with other indie-styled artists like Smith Westerns, Wavves and Beach House. Max Bloom says that the “brightness” of Coady’s sound works well with the songs on this album. “I’m used to doing everything [in the studio] myself; I’m very hands-on,” Bloom says. “And Chris is a hands-on producer. So this meant giving a lot of responsibility to him. And just the opportunity to have someone else in the room, someone to talk about what you’re doing, is a big help. It’s a different way of working for me, and it was a very interesting one. And a positive one, for sure.”

The album’s primitive/abstract artwork (by Katherine Campbell) is likely to start a few conversations. “I gave her the tracks, told her a little bit about the album, and she went away for a long time, and came back with a few things,” Bloom recalls. “The [art chosen for the] album cover stood out for me; I don’t know what it was.” He prefers to leave its meaning open to individual interpretation. “We have a backdrop of the album cover when we play. When you look at that, you might have your own opinion of what it might be. And that’s what we wanted out of the artwork.” 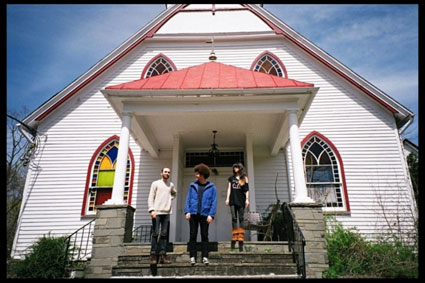 On Glow & Behold, Yuck also moves beyond its guitar/bass/drums format to include brass on a few tracks (among the album’s strongest). “It was an urge to try something different,” Bloom says. “With the first album, we had a strict limitation. It worked, and it was fun to write within those guidelines; we used those limitations to our advantage.” He describes the addition of horns – played by him and two guest musicians – as “a way to amuse ourselves,” but the end result expands on Yuck’s sonic palette in a logical way that feels quite natural.

That said, onstage, Yuck is sticking to its stripped-down trio featuring Bloom on guitar plus bassist/vocalist Mariko Doi and drummer Jonny Rogoff. “I like the live experience to be something completely different form the record,” Bloom says. “A lot of people who come to see us live comment that it does sound a lot different. When you’re at a show and that’s what you’re seeing, it’s special in that way.”

Yuck released “Rebirth” as a single ahead of the album, and then “Middle Sea” as a single after the album came out. Asked if he views the album format as viable in this age of download culture, Bloom says, “I don’t know if it’s necessarily the best way, but for me it’s the only way. The album is the highest form that a band or an artist can use to express themselves. For me,” he continues,” I only ever listen to albums. If I like a song, I want to listen to it in the context of an album. In this day and age, that might be old-fashioned.”

Yuck will be at The Mothlight in Asheville NC on Tuesday, February 11.