Bill Kopp: For me, from a musical standpoint, there’s a paradox where the two Brotherhood albums are concerned. Of course it goes without saying that I am a big fan of both (and the Joyride album as well), but what’s fascinating to me is that the original band labored over the first album, and cobbled the second one together with a significantly different lineup. And the second album – for me, anyway – holds up better than the first. It has aged a bit better. Do you agree, and if so, why do you think this is the case?

Phil “Fang” Volk: I think I’m a little too close to the subject to give any preference to the approach used on these two very different and diverse Brotherhood albums. Bottom line: I love them both for different reasons, and because they encompass a time period in my youth when I was very prolific musically, one song is not necessarily better than the next one. It’s just a body of work – an artistic endeavor with lots of passion and sincere motivation – even some incredible innocence for that time period. 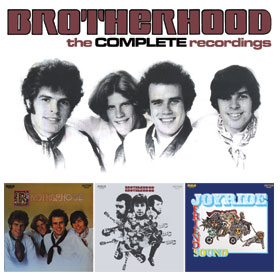 We weren’t living in a vacuum. This music unfolded as we grew and matured. It was always a work in progress, and a reflection of our current feelings on love, romance and youthful angst, and occasionally our personal vision of a world in turmoil and what might solve it. These two albums are obviously very different. The first Brotherhood album was over-produced and way over budget, and it was hard to hear a distinctive rock-band-sound in the midst of all that audio lushness, but the songs are still good. And there’s enough soul and musical nuance to make this an enjoyable listening experience. I also feel it’s a very worthy, creative effort showing our versatility and wide musical range.

It’s obvious we were heavily influenced by the theatrical production of The Beatles‘ Sgt. Pepper album; who wasn’t? We had the budget. Why not? In hindsight, we probably should have concentrated on being a rock band, remembering that we were the core rhythm section of one of America’s top bands at the time – the Raiders.

During our sessions at RCA, an unknown group of country-and-western-type boys showed up with their band and started recording in the studio next door to us. They even asked us, as “experts,” to come over and listen to one of their basic tracks they had just laid down. It was just a couple of guitars, bass and drums, and basically a rhythm track with no vocal, but it was in the pocket with a good simple, primitive groove – so different from the huge production stuff we were doing in our studio. Privately, Drake, Smitty and I had to grin and chuckle a bit that these boys had such an elementary approach to their music, while we were stuck in the “Beethoven syndrome.” As it turned out, these boys called themselves Creedence Clearwater Revival. And once John Fogerty put the vocal on that simple, little rhythm track – the one that made us grin – it was called “Proud Mary.” Those boys soared to the top of the charts, leaving us scratching our heads wondering where we were missing the boat.

That’s one reason why the second Brotherhood album sounds a lot more like a rock band with a more consistent power trio sound throughout: minimum production and overdubs, with the emphasis on making a solid rock and roll album. And that’s exactly what it was, with enough grit, simplicity and punch to fit in with the musical vibe of the day – and artistically, nothing to apologize for – and perhaps, the angle we should have used, commercially speaking, on the first album. Maybe then the public could’ve recognized who we were, and the marketing could focus on our rock’n’roll roots and our Raiders legacy, which was still a very valid launching platform; we still had the respect of our fans.

Unfortunately, the second Brotherhood album – although having many strong performances which definitely “kicked-ass,” – this lean and mean, streamlined production was a worthy effort, but it was simply a case of too much, too little, too late. Plus the record label didn’t get behind us to promote the band and get us on the radio, or on the road, or on TV, or simply get us in front of the public with billboards and magazine articles. It seems like RCA had already written us off as a loss, and from a business standpoint, they were exercising the law of diminishing returns, even before the album came out.

We felt the end was near during the production of this second album. Drake and I tried to hide our discouragement, but it was hard.. The music kept us sane and focused as we forged ahead with what we thought was a damn good rock’n’roll album, and although it never hit it big, it still resonates with great energy and pride of ownership. The second Brotherhood album speaks volumes about our determination to survive and not give up. Back then it just seemed like the cards were stacked against us.

This new CD release of our complete recordings is the most terrific gift I could imagine. All these songs are like my “children” who have grown up and made something of themselves. It’s great to be alive and see this day finally come.

Brotherhood: The Complete Recordings is out today, available on Real Gone Music. — bk