Bill Kopp: We’ve spoken in the past about Brotherhood recordings that might still be “in the can.” I know that no finished cuts – that is, songs that were fully recorded and mixed down from multi-tracks – exist beyond what’s on the albums – But are there multitracks out in your garage or something? And if so, do you think that the renewal of interest in the band might lead you to do something with those in the future?

Phil “Fang” Volk: Actually, there are a few songs that somehow didn’t make the cut. They were recorded, and mixed down, but for some reason, we didn’t include them on the albums. One was called “Problem Child,” which seemed a little juvenile, or even too teeny-bop for our current music direction. Another one that I’m really sad we didn’t include was our version of “Slow Down.” It was a killer version, and our old manager Leo Makota kept insisting on us releasing it as a single, but we were reticent about that, thinking instead that our main goal was to promote our original songs. After all, that was the main premise – the main guiding force and idea behind us forming Brotherhood – to get our original material into the marketplace, which we felt was relevant for the times. 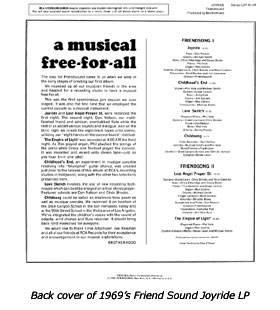 We wrote all types of ditties – fragments of songs that never got fully completed or recorded – or if they did get recorded, they never got finished. We even dabbled with a very cool song that Barry Mann and Cynthia Weil had written for the Raiders. It was a song we had previously recorded at Columbia, but producer Terry Melcher decided to scrap it and not include on the Spirit of ’67 album. It was called “Long Way to Go.” It was kind of a dark, eerie, druggy sort of love song, but it had a great musical hook – a constant, repeating guitar line – that was almost hypnotic.

There are a couple more songs that I recall had been recorded, and mixed down, but weren’t included. One was a song I wrote called “Colorful Day,” a soft little sensitive love ballad, written in waltz time, that documents my slow recovery out of the darkness of the past two years in grieving my brother’s death, as well as our painful and traumatic break with the Raiders, with all the lawsuits, and the inevitable struggles of Brotherhood to get back into the marketplace. My wife (the former Tina Mason) was the inspiration for this song, because she brought sunshine and joy back into my life at a time when I really needed it. Someday I’ll release a version of this song on my own. It’s a sweet tune. It was part of some of our experimental “bootleg” sessions where we held on to the tapes prior to doing any official recording at RCA. Friend Sound‘s Joyride [also included on the new The Complete Recordings set – ed.] was actually that – an experimental, “bootleg” session at Valentine Recording Studios. Ironically, RCA bought the master tapes and released it as an album, but none of it was done at our RCA studio. It was all done on the side and at our own expense, so it was fortunate that RCA picked it up – didn’t question our motives, methods or legal protocol – and, amazingly, we ultimately got paid for it. I have to thank RCA for sponsoring and supporting our creative adventures, and giving us the freedom to experiment with our music.

I have several tracks from these “bootleg” sessions. Often we would try out a song, but later change or modify it at RCA. So, I have a few rare gems of alternate versions of songs that later appeared on one of our Brotherhood albums. I have a very cool alternate version of “Family Tree,” that I like every bit as much as the album cut.

Decades later, I went to San Francisco and stayed at Drake’s house for several days. He had built a beautiful recording studio in his basement. We recorded three songs. We mixed them down, and when were were finished, I think we both got a little sentimental thinking about our amazing journey we had made together in this crazy music world. Probably, one of the main reasons we both got a little choked up is that two of the songs were from our Brotherhood catalogue: a new and jazzy version of “Forever” with my voice as the lead singer this time, and a quirky, rock beat version of “Box Guitar.” Drake had mixed feelings about these two new versions, but we had some fun with them, and I think they were decent, especially “Forever.” My oldest son Christian thought it was a very fanciful, hooky, creative interpretation of the song. But the song that won Drake’s stamp of approval was one of my originals called “Blue Revolution.” This bluesy, protest rocker is cut from the same cloth as many of our message oriented Brotherhood songs, like “Doin’ the Right Thing,” except it was more funky and snarly, on the order of the Rolling Stones. I wrote it after the Brotherhood days, but it would have been perfect for us. Drake played some exceptional blues guitar riffs on “Blue Revolution.” That was probably the last time I really heard him play so great – with so much soul – before his cancer took him down.

Bill Kopp: Some 45 years have passed between the release of the last of these albums and now. I’d like to know some of your thoughts upon hearing the masters again for probably the first time in a while.

Phil “Fang” Volk: It’s funny you should ask that question. Because I would expect a question like that, but the fact of the matter is, hearing these songs on CD, remastered, and rehearsing with my current band Fang & the Gang to learn a few of these tunes has been nothing short of a very poignant, emotional roller coaster for me, from the word “go.”

It’s easy for the emotions to be stirred up when I listen to each song, and remember each recording session. The vibe of those turbulent, creative, prolific years is still resonating with me, as if it were yesterday, but at the same time it feels like another lifetime, far, far away, and long, long ago! It’s especially a sentimental journey due to the fact that my fallen brothers, Drake and Smitty, are no longer here to enjoy this unexpected revival.

What’s so amazing is that when my band started rehearsing these tunes I thought it would be a cake-walk, but as it turns out, it’s been terribly challenging to re-create all that passion, nuance and creative range that’s so indelibly stamped into each one of these songs. I’ve gained a new appreciation for our musical prowess, and our unfading dedication to precision, soulfulness and groove. These songs have really held up over the years, and it makes me proud that we put so much heart and soul into producing this music. It really shows that we had “burned our ships, and there was no turning back.” We really believed in our musical mission. That fearless dedication to our musical vision really shines through in these albums. The fact of the matter is: the music lives on as a testimony of three guys who loved each other and wanted to leave a distinct footprint in the musical landscape. despite some very difficult odds. But at the end of the day, the music and the story have a life of their own.

My children and grandchildren think that this music is pretty cool, and that’s good enough for me!