Bill Kopp: When you and I had our conversations that formed the basis of my Brotherhood history (and the revised/updated liner notes for Brotherhood: The Complete Recordings), one of the subjects we touched upon was the series of informal jam sessions that took place at Drake Levin‘s pad. Due to space considerations, only a tiny bit of that topic made its way into the finished piece. Could you tell me the Buddy Miles story again?

Phil “Fang” Volk: Drake’s house on Camellia Street was the scene of many fine jam sessions, with many notable players. On any given day, you could find people like David Crosby, Steve Winwood, Buddy Miles, Dave Mason, Chris Ethridge, Johny Barbata, Lee Michaels, Joel Scott Hill, Stephen Stills, Dick Dodd, and many others hanging out and participating in the jam sessions. 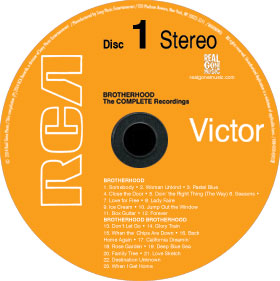 The equipment was always set up, and there was a lot of privacy, because the property had a big high wall all the way around it. This was Brotherhood headquarters for working on our forthcoming albums with RCA Victor. We had the respect of the music community, because our fellow musician friends thought that we had made a very bold move by leaving the Raiders to pursue our own music, and that alone gave us some valuable “street cred.” So coming to the Camellia house was considered a cool thing to do.

Buddy Miles used to show up often – but lo and behold, and oddly enough – on one particular day, Johny Barbata also showed up for the jam. He brought his kit and set up next to the other drum set that we had there. And I might add, that these two guys had completely different styles of drumming. Johny was slick, well-trained, and an educated technician, endorsed by Buddy Rich as the best new, young, up and coming drummer of the new rock generation. Buddy Miles, on the other hand, was all guts, blood and sweat, with every beat being more soulful and flashy than the last one. He was raw, mean and formidable – an almost “animalistic force of nature” to be dealt with – so powerful and gritty. Both drummers were awesome players, to say the least, but so distinctively different, both culturally, musically and image-wise.

Anyway, we had all started to play together on this jam session one day…a group of guys from the list above, and oddly enough both drummers insisted on playing at the same time. You could smell the competitive spirit in the air. As the jam took off, and the volume increased, with guitars, bass and keyboards pushing the limits of the amplifiers, the drummers being stationed on acoustic instruments – which required great physical endurance to pound out the beats with their own personal strength – started making their presence known by whacking out some power riffs and rolls of their own, in order to compete. Up to this point, they were basically keeping time, and being subtle with their fills.

But once Buddy smacked out a power riff around his tubs, Johny immediately answered with one of his technically perfect fills. It started going back and forth this way for several minutes, until the rest of us realized that our playing became meaningless, compared to the battle that had ensued between these two drummers. We all started to evaporate into “soft-focus” around the perimeter of the this “boxing ring.” One by one we dropped out as we watched this amazing challenge reach new heights with every eight bars that each man would submit as his answer to the other drummer’s licks. At first it was tit-for-tat, with Buddy doing a four- to eight-bar fill, then Johnny would mimic it perfectly, and perhaps add some special technique that gave it more flair and spike.

As Buddy noticed that he was being out-shined by this slick white kid, he poured on the soul and started inventing fills involving his elbows, his knuckles, and any other part of his body he could throw on those skins. Suddenly, it was Africa meets America, and no one was backing down, and the battle raged on for the next 20 minutes. We all watched in amazement as these two powerhouse drummers battled it out. We even got to the point where we were giving drinks to the these two guys: Buddy shot whiskey shooters while Johny did his eight bars, and water was given to Johnny as Buddy did his eight bars. And so it continued on like this, with no end in sight, because neither guy would stop, or back down, or quit and admit defeat. It was the most outrageous competition I’ve ever seen between two musicians.

We all urged them from the sidelines to stop and call it a draw, but they kept digging up the most amazing drum riffs out of their personal storehouses and vying for Top Dog Drummer. Their pride wouldn’t let them quit, even though Buddy was bleeding from his hands and knuckles, and Johny was exhausted and looking pale! We all decided to jump back on our guitars and keyboards, and play them out of this stalemate. It worked! You could see the relief on their faces when they knew that the end of this drum battle was in sight, as we ended the song, and came to a crashing finale of swirling sound that finished it officially.

Then we all shouted in applause and appreciation for what we had just witnessed, and we all went spontaneously to each drummer, and lifted up both of their hands in the air as “double-champions” and “winners” of the most incredible drum battle that has ever taken place on this planet to date!