Bill Kopp: You’ve come a long way from the beginning when it wasn’t about technical proficiency…

Nik Turner: But I’ve become technical just through practicing. I go busking on the street sometimes. I just play anything, you know. I’ll play Charlie Parker tunes, or whatever people want to hear. In Cardiff [Wales] I’ll go busking in the downtown district from eight o’clock at night until two in the morning. All the glamorous girls are out clubbing, and I get them all dancing. I’ll play bossa novas; I’ve got a whole raft of material. 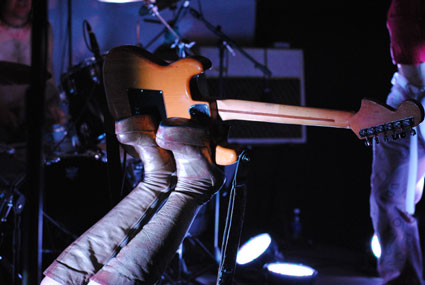 I’ll play these clever arpeggios and then end up on the right beat, so it all comes out okay. And it’s great; I’ll earn ₤200 in an evening. To me, it’s an end toward practicing. I see music as a language; you have to learn the vocabulary. That vocabulary is the ability to connect the notes, and then express yourself.

I practice every day. I feel music is a healing thing; I like to feel I can heal people. I went to Egypt when I left Hawkwind. I was supposed to stay with a friend, but he got deported the day I went there. When I landed, I got a taxi to the Great Pyramid. I climbed to the top of it and played my flute.

BK: I read about that.

NT: It started raining! It was quite bizarre in a desert. So I recorded this music, spending time inside the Great Pyramid, recording and meditating and chanting. I got use of the place just by trying, really. I had this old Bedouin man who said he was arranging it for me; I didn’t believe him. He introduced me to the Director of Antiquities on the site, who I then asked if I could play my flute in the pyramid and record it. And he said, “Yes, just buy a ticket. And then I’ll close the pyramids to the public so you can spend four hours in there.”

So I did that, and I devised a story as I went along. Rather than just doodling along on my flute, I felt I should make something constructive of it. I visualized this entity going into a pyramid, and meeting the crew of that pyramid, which was an interdimensional traveling machine. And the crew were actually Egyptian gods. So you had to know all these passwords and spells and so on to get through. So [the main character] meets all these gods, and comes to in Egypt in 1977. And so I tried to illustrate this all musically.

BK: You didn’t think that all up right there and then…?

NT: I just developed it as I went along. Then I went back to England, and I had a tape which I had recorded for my own amusement. I thought it would be nice to have a recording of this sound. And I had a recording contract to fulfill, so I managed to talk the record company into letting me go into the studio and record over it, and release it. I got all these musicians including Steve Hillage and his girlfriend Miquette [Giraudy]. And Mike Howlett, the bass player from Gong. Tim Blake, who now plays with Hawkwind. And other people. I wrote the lyrics, culled from the Egyptian Book of the Dead. 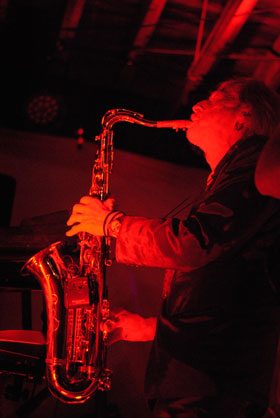 And then I found that I had some healing power. I went to the Festival of Mind, Body and Spirit. And I had a photograph done of my hands; the people said, “Oh, you’ve got the healing power in your hands.” I thought, “That’s interesting.” Then a friend of mine said, “Oh, I’ve got this awful pain in my tummy. Can you help me? And I said, “I don’t know what you mean.” He said, “Can you put your hands on it? I think you can heal it.” So I put my hands on it, and thought about the Egyptian gods and the elements and [laughs] the cosmos. Stuff like that. And he said, “The pain’s gone.”

And I found I could do that with several people. I didn’t think, “Oh, I’ve got healing power; let me go round healing people.” But people, when they were in need, I thought perhaps I could help them. There was a lad who had migraine; I put my hands on his head, and he said my fingers felt like ice. So I did all this stuff, and thought about it, and breathed in all the good and positive energy from the sun. And I blew it into him. And he said, “Oh, the pain’s gone.”

So it’s quite interesting. Sometimes it works, and sometimes it doesn’t. I don’t know what governs it. I sort of think if you get big-headed about it, it stops working! You become arrogant and egotistical…

BK: And it goes away.

There’s this video called This is Hawkwind. Do Not Panic. It’s a film that was made by the BBC. It’s a documentary. And I was invited to do a question-and-answer about the film at a place where they showed it in Brighton. And some people said, “Tell us about what you did in Egypt.” So I told them all that, and I said I had this healing power. Then this woman in the audience said, “I’ve got this terrible pain in my back. Can you put your hands on it?” So I did, calling upon the healing of the Egyptian gods and the powers that they had. The magical properties, the awesomeness of it all. And her pain was gone.

I think it’s fantastic. And I try to make these gigs healing experiences. I try to make people feel good, and to communicate with them. We’re doing this tour at the moment, and it’s going really well.

BK: Playing the South…that’s not typical for you.

NT: I don’t know what’s typical for me! I’ve played over here in the USA a couple of times before; I did a tour in the 90s.

BK: You were just in Raleigh and Charlotte before here…how did those go?

NT: you know, the gigs are great, but they’re not all that well-attended in some places. I don’t know if it’s the fact that people don’t know me, or aren’t aware of Hawkwind, or if [the ones who do know] have all died! Or that they’re old, and can’t go out any more!

I’m promoting the album, and doing material that people would like to see. Because it’s the Space Ritual material. And that’s an iconic thing. 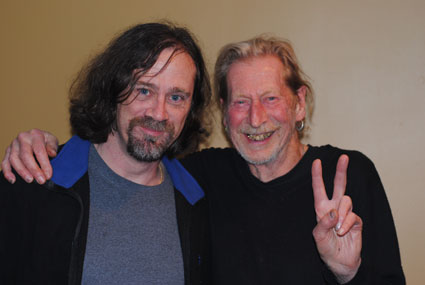 NT: Right. So…have you got any more questions?

BK: I think you’ve given me plenty of your time, and you have a show to do this evening, so I’ll just be happy with what I’ve got.