Nik Turner: And the success of the Hawkwind “Silver Machine” single enabled us to mount the Space Ritual [tour], which was quite an expensive project. Jonathan Smeadon was quite a high profile lighting technician; he was quite creative. He had been working with people like Steve Winwood and doing stuff for Island Records. So he worked on Barney Bubbles‘ concept, which was that the band was the spaceship. And the audience were were what powered it [laughs] to other dimensions. So it was a sort of total event for everybody, really.

And then with regard to the stage lighting, Barney took all the astrological signs of all of the band, and the corresponding colors that go with them, and used those pointedly for the lighting of those people. He also devised an entire stage plan using the Pythagorean music of the spheres. All the planets were suspended on a cord, and they all vibrated at different frequencies. And out of that, you get the Western scale.

The Space Ritual show was a total concept. We had dancers, a very good mime artist who had studied with Marcel Marceau, and a couple other people. There was the lovely Stacia, who was a young lady I had met at the Isle of Wight Festival, and who I coerced into playing with the band. She’d take off her clothes, and Barney would paint her body with different colors. It was very arty; it wasn’t sensationally pornographic or anything. It was presented as, “You’ve seen a naked woman before; here’s another one.” She was about six foot tall and had a forty-two inch bust, so she was quite larger than life. Every schoolboy’s dream! 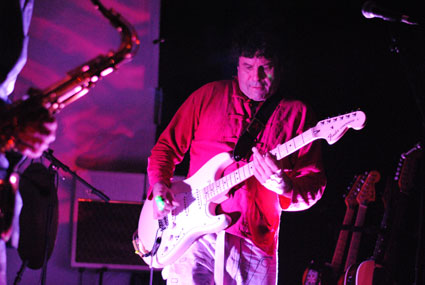 There was also another dancer, a young lady from San Francisco. She was a contortionist as well. Fun and games, that.

When we got the show together, Jonathan was using ten projectors onstage; each one had a slightly different image to give the appearance of movement. We had a dragon that flew across the screen, and a city that built up as we went along. Then it decayed, and out of that grew a tree. These were all moving sequences, not movies. All very clever stuff. Nothing else like it was happening at the time.

Bill Kopp: Multimedia before there was a name for it…

I was always into theatre. My family were all in theatre and cinema. I should have been an actor, really; that’s how I fondly imagined it. So I used to come out onstage dressed as an archbishop; I’d bless the audience, and then I’d turn to my equipment and mime taking it apart. And then I’d put on this other costume what looked like a frog’s head. The archbishop’s mitre was actually a frog’s head, with the mouth pointing up. So I’d pull it down over my head and turn into this frog. And then I’d, er, interact with the dancers. [laughs]

BK: Of course you would. 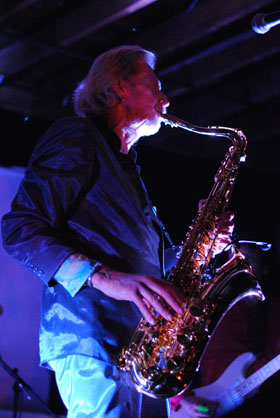 NT: It was all really very spontaneous…it was all very exciting. And we’re going to perform a version of that tonight. [Note: Indeed they would, and keyboardist Kephera Moon provided the requisite suggestive writhing on the stage floor that is so essential to the piece. – BK]

BK: Hmm…well, you just answered about six of my questions. Let’s see…I mean this in the best possible way. Through the production choices and instrumentation, plus of course the lyrics and song structure, Space Gypsy sounds as if it could have been released in 1970. Was the texture of the music consciously guided by a goal of achieving that, or is that simply how it comes out when you do it?

NT: There are certain characteristics about it, yes.

I didn’t write any of the music. I wrote lyrics. I came into the situation quite late, really. They had written songs. And I’m quite happy to perform them; it’s a collective work where people who had written stuff got paid for it. So I wasn’t planning to have written it all, anyway. I think it’s all very nice and I like it. It’s got a flavor of Hawkwind about it, but on the other hand it’s quite fresh. It’s all original material; there’s no covers.

BK: So in addition to doing music from way back when, are you doing any of the new material?

BK: That’s the one about the NASA Challenger, right?

NT: Right. The drummer [Jason Willer] wrote that song; I didn’t write it. He told me, “We can change the lyrics if you don’t like them.” I could have rewritten all the songs, but I thought, well, it all gets a bit contrived. And I’d rather do something creative with these guys and see it as a stepping stone toward the next project.

BK: You’ve got a lot going on. After this tour, what’s next for you?

NT: The weekend after the tour, I’m going to Germany, where I’m playing a psych fest. They’ve employed me as the spirit of the festival. They’ve bought me an air ticket to go over there; I’ll probably play with all the bands.

Then in December, one of the bands I’ve got called Inner City Unit has a couple of gigs. Then I’ve got gigs with another band of mine called Space Ritual, which plays some Hawkwind material, but only stuff that I wrote, or that Robert Calvert wrote. 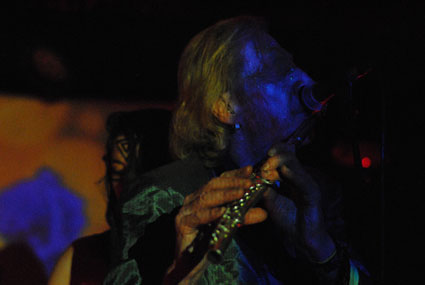 I’ve got all these bands that I put together myself. I’ve got another band called Outriders of Apocalypse, which is based upon Mayan mythology. The music is influenced by Spanish classical music and some other classical music; I’ve got the theme tune to “Scheherazade” as one of the bass lines. I’ve got a girl playing trumpet, another girl playing trombone, and myself playing saxophone and flute. A guitarist, two bass players, a drummer. A clarinet player, two girl singers, and dancers. It’s on YouTube. The delivery is like Miles Davis‘ Bitches Brew. Leaning that way.