And it is about that good music that I speak – briefly – with Mr. Leo “Bud” Welch. He has made the two-plus hour trip north to his manager’s office on Memphis’ north side specifically so that he can take my call. “I’m not Mr. Welch; I’m about thirty-one years his junior,” says Welch, using a line I strongly suspect he’s employed countless times in his 81 years. “Call me Leo, Bud…whatever.”

I ask him about the musicians accompanying him on Sabougla Voices. “That’s Jimbo Mathus backin’ me up” on some tracks, he says, though Welch plays guitar throughout the album. Mostly he’s on electric, but occasionally – as on “Mother Loves Her Children” and “A Long Journey” – it’s just Leo and drummer Andrew Bryant. Perhaps foolishly, I ask him what kind of guitar he plays on the album. “Mostly electric. But on the solo songs, I got a country guitar. You know: with a hole in the middle, and the sound comes out of that hole.” 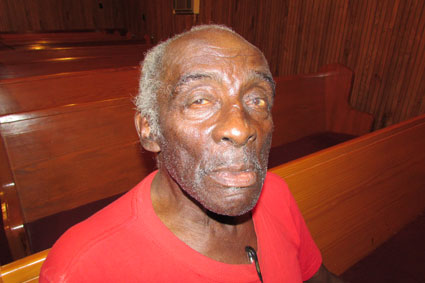 Surprisingly – and perhaps counterintuitively for an album of this style – Sabougla Voices is not one of those old-fashioned, “everybody lays down their parts together at once” kinds of records. “I did my part of it first,” Welch explains, “And then they [producer Bruce Watson et. al.] put it together.” But the organic results delightfully belie that modern approach. And asked to explain his mixing of gospel and traditional blues, he says only, “That’s how I do it. That’s how I do my music. I don’t know what you call it; I call it praising His name.”

Leo Welch’s approach bears some similarities to the pioneering work of Sister Rosetta Tharpe; her synthesis of blues and gospel – not to mention her electric guitar work – was pioneering and forward-looking. Welch admits a fondness for Tharpe’s work, and the song he cites – a late 1940s cover of Mahalia Jackson‘s “Move On Up a Little Higher” – displays that hybrid gospel/blues sound.

Since Welch waited eighty-plus years to become an overnight sensation (He was the subject of a profile on NPR earlier this month), I ask if the songs on Sabougla Voices are tunes he’s carried with him for ages. Yes and no, he explains. “Some of them have been mine for two, three years. One of ’em – ‘Praying Time’ – has been mine since Nineteen and Ninety-nine.” He sums up his overall approach by citing the track “His Holy Name.” “I keep on singing His holy name,” Bud Welch says, “so my singing won’t be in vain.”

Welch says he’s been performing since 1945, and he tells me he has “eleven gigs” lined up in Minnesota, followed by a tour of Europe and the UK. This week (January 23) he’ll perform in Memphis, and he has dates scheduled in Mississippi and in Nashville into February. Many more concert dates are in the planning stages.