Modern r&b-flavored pop act Fitz and the Tantrums returned to Asheville recently for an enthusiastic, packed-house reception. Focusing on tunes from their second album (2013’s More than Just a Dream) and peppering the set with cuts from their breakout 2010 debut Pickin’ Up the Pieces, the group wowed the audience. A high-energy show from start to finish, the performance slipped in a few crooner/ballad type numbers, but even on those, the group kept the audience on its feet. 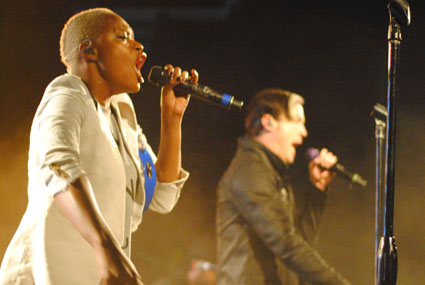 The tunes on More Than Just a Dream have a bit more slick studio polish and radio-ready sheen than the debut, but onstage, the songs all flowed together nicely in a solid mix. Lead vocal duo Michael Fitzpatrick and Noelle Scaggs shared the spotlight, alternately drawing attention to themselves as individual singers and as a tightly-knit team.

With the success of the slicker approach on the second album, it remains to be seen what direction the band’s studio releases will follow, but onstage, they’re as exciting and soulful –in the classic sense – as ever. Below are a couple dozen photo highlights from the November 5 show at Asheville NC’s Orange Peel.

Tags:asheville, fitz and the tantrums, the orange peel