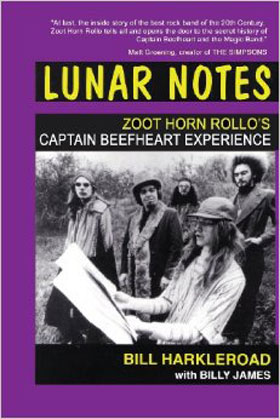 Lunar Notes is not a Great Book, nor do the requisite few hours spent with it reveal anything that suggests the author’s intention that it be so. What it is is a look into one man’s experiences as a member of Captain Beefheart’s Magic Band during their most musically fertile period.

In this slim and fitfully revealing volume, Bill Harkleroad – re-christened, as were most Magic Band members, with a new moniker, in his case Zoot Horn Rollo – tells the story of his joining, being in, and eventually leaving Beefheart’s employ. Zoot Horn Rollo was named by Rolling Stone as one of the 100 greatest guitarists of all time (#62).

Beefheart (born and sometimes known as Don Van Vliet) was a man who defined idiosyncratic, and contemporary reports strongly suggest that he was a demanding, sometimes vicious taskmaster, often engaging in emotional manipulation to get what he wanted out of his musicians. Harkleroad/Rollo’s account is very much in line with this view, though he does seem to hold back on revealing (or finds himself unable to reveal) what one assumes are even more lurid anecdotes. The reader comes away with the impression that Rollo and his bandmates all fell victim – to varying degrees – to some sort of musical Stockholm Syndrome. Throughout Lunar Notes, Rollo re-asks the why-didn’t-I-just-leave-then question, and his answer may or may not satisfy readers. He didn’t make any money and received little in the way of compositional or creative credit. But simply put, from his standpoint, the music made staying worth it.

Rollo takes the reader through the recording processes that created such revered works as Trout Mask Replica ( a classic, but one of the most “difficult” albums one can imagine) and Clear Spot, explaining the circumstances under which the music was created. Beefheart is portrayed throughout as a man of considerable talents, almost none of which were conventional. He is not shown to have had any fixed ability on any musical instrument save harp (harmonica); his compositional approach through this period often consisted of whistling parts to a band member whose job it would then be to transfer that semi-abstract aural concept into musical notation. Zoot Horn Rollo’s role was originally as The Magic Band’s guitarist, though as time progressed, he fell into this added transcriptionist role.

Beefheart – as Rollo draws him – seemed almost wholly free of the constraints that pop music might apply upon a musician: the songs were often in three different keys at once, and in two or three different time signatures. How that worked in practice cannot effectively be described in words, though Rollo/Harkleroad gamely tries. Though the author does a fine job of explaining things in a manner that doesn’t require deep musicological background, it’s absolutely necessary to have some familiarity with the actual music for much of the book to mean much of anything.

Of course, for the adventurous listener, time spent with any of Beefheart’s albums from Safe as Milk through Clear Spot is time well spent, so making a listen to those a requirement of enjoying Lunar Notes isn’t unreasonable. But to those who don’t appreciate Beefheart’s music, Lunar Notes will be of limited interest.

But, I should add, there are gems here, even for the non-Beefheart fan. Zoot Horn Rollo tells stories –albeit brief ones – of interacting with Ian Anderson of Jethro Tull, a number of jazz greats including Ornette Coleman, and – no surprise here — Frank Zappa. In fact most of the players who came and went through Beefheart’s orbit had some connection to Zappa; many played in his bands before, during or after their stints in the Magic Band. And that says something about those musicians’ ability and flexibility, because the working methods of Zappa and Beefheart were quite different. Though both were notoriously difficult taskmasters, Zappa brought a musically sophisticated approach to songwriting and arranging; Beefheart, on the other hand, was almost a savant. His method of arranging seems to have involved forcing the musicians to keep playing a song – sometime for hours on end, in rehearsals over a course of many months – until he liked what he got out of them. This, as opposed to instructing or even suggesting what they should play.

Lunar Notes was cowritten by Billy James ( aka Ant-Bee), now an Asheville NC resident and respected associate of many progressive and avant garde musical personalities worldwide. The book was first published in the late 1990s, subsequently going out of print for many years. The 2013 reprinting features the original cover (complete with laughably hyperbolic blurb from The Simpsons creator Matt Groening) in a slightly different shade of purple, but is otherwise the same as the original book. No new content or updating has been added.

Judging by Lunar Notes, Zoot Horn Rollo is a man of solid if unexceptional storytelling abilities; reading Lunar Notes is the the equivalent of spending three or four hours with a really good musician who has some interesting stories to tell, but who doesn’t bring the insight of an actual writer to bear upon the story. Yet owing to the dearth of written material on Beefheart, that’s still enough to make Lunar Notes worth reading for anyone with an interest in the music of Captain Beefheart.