Viewed as an entire body of work, the music of Frank Zappa is near-impossible to pin down. There are significant elements of everything from doo-wop to progressive jazz to avant-classical to blues to rock. By the time Zappa died of prostate cancer (just over twenty years ago), he had built a catalog of more than sixty(!) albums; more than thirty posthumous albums have been released by his estate since that time. In the words of Edgard Varèse – one of Zappa’s major influences – “the present-day composer refuses to die.”

A vital means by which Zappa’s music is kept alive is the effort by ensembles that tour and perform his music. Often dauntingly complex, Zappa music requires musicians of the highest caliber. But because (as Zappa often pointed out) humor does belong in music, a dour, overly-schooled approach to his work simply won’t do: the musicians must be exceedingly talented, yet free enough to (a) follow real-time cues as to the direction the music takes onstage, (b) head off on their own exploratory solos when called upon to do so and ( c) bring a finely-tuned sense of humor to the whole thing. 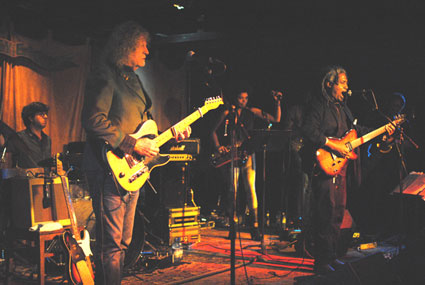 One of the premier exponents of present-day Zappa music is Asheville’s own Project/Object. The group – named after Zappa’s label for his entire body of work, held together by what he called “conceptual continuity” – was founded in 1991 by guitarist André Cholmondeley. Originally based in the Northeast, P/O would occasionally head south to play highly-regarded tour dates at Asheville’s StellaBlue (now Asheville Music Hall). After a number of visits here, Cholmondeley relocated to Asheville. His impressive musical chops and his deep love and understanding of the music made playing and arranging Zappa’s music a labor of love.

Cholmondeley’s day job – working sound/stage management for a who’s-who list of rock giants – has meant that P/O tours are not as frequent as they once were. And because the complexity of the music all but requires a large (by rock standards, anyway) ensemble, putting together a tour is often cost-prohibitive. But when he’s able, André does it, and thanks to his stature in the musical community, he is able to draw upon some of the finest talent available to fill the ever-shifting ranks of Project/Object.

As fortune would have it, for P/O’s latest show – Sunday December 22, 2013, at The Grey Eagle – Cholmondeley fond a good portion of that staggering talent right here at home. Keyboardist Jamar Woods of The Fritz played an old-school stack of synthesizers, creating the palette of out-there sounds necessary to create the Zappa vibe. A thrilling, expressive, three-piece horn section featured all locally-based talent: Greg Hollowell (Asheville Horns), Derrick Johnson (Yo Mama’s Big Fat Booty Band) and Debrissa McKinney (Empire Strikes Brass and more other projects than one can count). Bassist Keith Harry of Asheville’s Deja Fuze anchored the complex bottom-end, rounding out the local contingent in this P/O lineup. 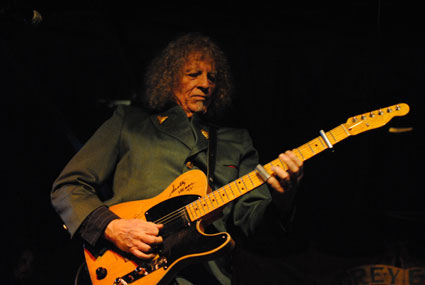 For the remaining two key positions in the lineup, André enlisted journeyman drummer Eric Slick (Dr. Dog, Adrian Belew’s Power Trio and – for select performances including this Asheville date – longtime Zappa guitarist Denny Walley. Walley’s slide guitar and vocal were integral components of Zappa’s live and studio efforts from the late 70s through late 80s; he also played for many years with Captain Beefheart, and currently leads The Magic Band, an outfit that is to Beefheart’s music what Project/Object is to the music of Frank Zappa.

In keeping with the spontaneous, deliberately ad-hoc nature of the current-day Project/Object, this eight-piece configuration had relatively few practices before taking the stage at The Grey Eagle. But the performance bore no hallmarks of ill-preparedness: the group ran through spirited renditions of Zappa’s works, drawing material primarily from the period during which Walley played with Zappa. The eight-piece delivered deep cuts from Joe’s Garage, Acts I, II and III (“Outside Now” and the very NSFW “Crew Slut”), Sheik Yerbouti (“Broken Hearts are for Assholes”), Tinseltown Rebellion (“Easy Meat,” “Bamboozled by Love,” and the Zappa favorite “Peaches En Regalia”), Zoot Allures (“Ms. Pinky” and “Black Napkins”), and a Walley lead vocal on the skewed blues of “Suicide Chump” (from You Are What You Is). The band dug deep into the Zappa catalog for “T’mersh Duween,” a demanding, intricate number that never appeared on record until after Zappa’s death. And Cholmondeley headed in an unexpected direction for the second set opener, performing a solo (vocal and guitar) reading of “The Idiot Bastard Son,” from The Mothers‘ 1967 album We’re Only In it for the Money.

As fascinating as that solo spot was, the highlight of the evening was the unceasing interplay of the musicians onstage. Because of the complexity of the music, several members used printed charts on some numbers. But that did not detract from the without-a-net nature of the music. And that quality was on full display when André led the band through a series of intricate changes on “Titties ‘n’ Beer” (originally on Zappa in New York): in the same manner as Frank did with his bands, Cholmondeley cued various members of the band – with no advance warning — and led them though a bizarre, exploratory (and highly entertaining) musical maze that called upon musical skill, creativity and lightning-fast reflexes. 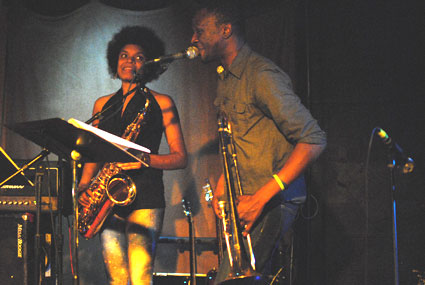 And the band – like the audience – smiled and laughed heartily though it all. Because as knotty and dense as Zappa’s music can be, it’s all about fun. Through the lyrics, the nutty sound effects, the “secret words” that are part of any Zappa-related performance, the solos, and the musical dialogues, this Project/Object delivered on all fronts.

And here’s a bit of welcome news: the show went so well that Cholmondeley plans another P/O date in Asheville sometime in the next few months. So while of late Asheville fans have had precious few opportunities to see Cholmondely’s thrilling aggregation, the future looks promising.

You may also enjoy this 2011 conversation with Andre Cholmondeley and Zappa alumni Ike Willis.