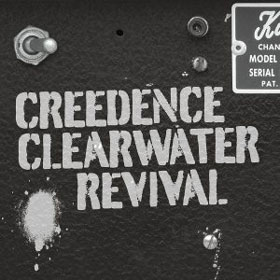 The catalog of Creedence Clearwater Revival has been issued, reissued, repackaged, re-re-packaged, and re-re-issued more times than I can count. Just a few years ago – 2008 – all of the group’s Fantasy LPs were reissued on CD as part of a “40th Anniversary” marketing push. Those reissues were each appended with relevant live bonus tracks. And then in 2009, all of CCR’s 45rpm singles were issued – on vinyl! – in a box with picture sleeves. A couple rarities were included in that set, too. And late 2012 saw the release of Ultimate CCR, a 3CD set of their music.

So one might think that the vault would be pretty well swept clean by this point: the band’s relatively short recording career was stuffed full of music, and Creedence left behind a catalog filled with rock’n’roll gems. Not for nothing are they known as the Great American Singles Band, yet their albums hold up through and through as well.

But wait! November 2013 brought yet another reissue, this latest one not-so-creatively (but accurately) titled Box Set. A 6CD package encased in a sturdy box, it contains all of the band’s albums – this time even the oft-maligned Mardi Gras is included – plus numerous live cuts and an entire disc of pre-CCR rare tracks.

The live cuts are mostly things CCR fans will have heard before: most if not all were included on the 40th Anniversary sets, or can be found on The Concert or Live in Europe. And besides, didn’t Concord put out a CCR package called Box Set back in 2001?

Yes, indeed they did. But there are two differences – one important, one not so much — between the 2013 set and the previous one. First, the packaging on the new one is somewhat clever: the inner sleeves can be arranged to create a composite photo of a Kustom amplifier like the ones you’d have seen onstage with CCR back in the day. Now, if that matters to you in this age of digital downloads, more power to you. To me it’s little more than silly (if well done).

But the second difference makes it all worthwhile: Disc One of the set brings together all of the recorded material by Tommy Fogerty & the Blue Velvets and The Golliwogs. A great deal of this material has never been relesed until now, and what has is rare enough.

As many CCR fans will know, there’s no love lost between John Fogerty (the man who wrote, sang and played lead guitar on nearly all of CCR’s songs) and his former rhythm section (bassist Stu Cook and drummer Doug “Cosmo” Clifford, one of the tightest rhythmic duos in the business), and John’s brother Tom Fogerty passed away in 1990. So don’t look for (a) a CCR musical reunion nor (b) any sort of rapprochement between its surviving members anytime soon. And that’s fine: Fogerty has his solo career, while lifetime best friends Cook and Clifford have their hands full with the long-running Creedence Clearwater Revisisted since 1995 (meaning that they’ve been a band much longer than the original CCR was).

Still, the legendary rhythm section remain happy to talk about their time with the original group, and there’s plenty of interest in what they have to say: my 2006 interview with Stu Cook remains one of the most popular features in my archive. With that in mind, I recently spoke with Doug Clifford – just before he left for some concert dates in (of all places) Vietnam – about his old band and this latest reissue. Here’s an edited transcript of our conversation.

Bill Kopp: When I spoke to Stu several years ago, he told me something I hadn’t known: that you and he consciously modeled your playing style on that of Al Jackson and Duck Dunn. Was that true from the very beginning, or was it something that evolved? Because on the Golliwogs records, I don’t quite hear that signature style.

Doug “Cosmo” Clifford: It was something that evolved later on. We were fortunate enough to meet the guys and befriend them, and take them on the road with us. We did thirty-one dates in America with those guys, and they were just a joy to watch.

We had been listening to them, certainly knowing that they were the house band for Stax Records. Stax has some of the best music ever recorded. And I read your interview with Stu: the economy of [Booker T & the MGs] meant that they got the very most out of every note they played.