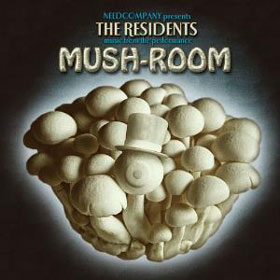 Though clearly not the only path, a common direction for a recording artist to follow is this: record and release accessible works, and then – as a loyal fan base is established – develop more challenging, esoteric works. The thinking is that the fans will follow.

But there’s never been anything conventional about The Residents, so – to the degree one can expect anything from them – they can be relied upon to chart their own journey. And so they have: while Meet the Residents was near about as inaccessible, amelodic a debut as has ever been committed to recording medium, over the group’s multi-decade career, they have (again with exceptions) moved in a more accessible direction.

Or maybe music in general has simply caught up with them. On their latest, Mush-room, The Residents display a melodic, cinematic quality that has been a hallmark of some of their work since around the time of The River of Crime (2006) and even earlier. Developed as the soundtrack for a dance performance by Grace Ellen Barkey & Needcompany, the eleven-track Mush-room draws upon sounds and textures from Angelo Badalamenti and others. But the album is decidedly, er, Residential in its foreboding, otherworldly tone.

Yes, the music – largely instrumental – is “dreamy.” But only if one’s dreams are more like nightmares. Mush-room sounds and feels like the impressionistic soundtrack to a deeply disturbing dream. Unlike early Residents albums, the instrumentation is relatively straightforward: many synthesizers are employed, to be sure, but more traditional and acoustic instruments figure into the mix. An early 80s-sounding synth melody forms the basis of the central part of “Musical Chairs in ¾,” and the ghostly percussion and string backing is adorned by some slowed-down singing that is, of course, creepy and unsettling.

“Sticks and Logs” employs an almost pop-classical approach: a yearning violin is accompanied by a lovely – and quite melodic – backing of synths and a relatively straightforward beat. Some stabs of brass add that doomy quality which is so often an ingredient of Residents compositions. Like many of the tracks on Mush-room, it’s an essentially accessible tune with elements thrown in to keep the listener off-center.

“Dung Beetles at Work” employs skittering sequences, koto (or a koto setting on a synth) and feels a good bit like the music on those 1990s Mind’s Eye audiovisual works. The insistent beat likely lends itself quite well to choreography, which is, after all, the goal of this music.

The drawing room piano textures that introduce “Broken Brake” evoke images of ballet dancers, and then the track shifts into a soundtrack-y feel. Relatively conventional wordless vocals actually add to the melodic quotient.

“Yellow Marrow” is as spooky and foreboding as its title suggests. A low hum – not quite feedback – persists throughout the entire track, as otherworldly vocalisms and sounds float in and out of the mix. The track is mysterious and disorienting, suggesting a hall of mirrors or creepy carnival “fun” house. The first side of the record (yes, Mush-room is available on vinyl) ends with “When the Wealthy Were Wise,” a fiddle-led track that strongly evokes mental images of northern Africa.

Harpsichord opens “Song for Grace,” the album’s most spaghetti-western styled track, and its most musically straightforward. It recalls some of the work that French outfit Mellow created for the soundtrack of Roman Coppola‘s 2001 film CQ.

Yawning cellos and plinking acoustic sounds (almost assuredly courtesy of a sampling device) make up the spooky, evocative “Between a Rock and a Hard Space.” Synthetics – Moogy bass lines and canned percussion – are used to good effect for the buzzing, clattering “The Birth of Mush Room.” The piano stabs in the tune suggest something major would be happening onstage, but of course without a video, listeners are left with their imagination to fill in the blanks. A vaguely Occidental vibe pervades the track, which also includes some orchestral passages (or mock orchestral, or ersatz-orchestral; one can never tell with The Residents). Other sections of the suite-like track include male vocalisms that again recall the music of northern African nations such as Mali. Near its end, the track evolves/devolves into a cut-up noisefest reminiscent of “Beyond the Valley of a Day in the Life.”

“The Dream I Almost Remember” folds in bits of what sounds like film soundtrack music of the 1930s, modern synthesizer, samplers, crashing percussion and more found sounds.

A sweeping string section introduces “Only Room for One More Mush,” the album’s closing track. It’s among the most “normal” and conventional piece of music on Mush-room, but the breaks that punctuate it classify it as soundtrack music. The track shows – if we needed reminding – that if The Residents wanted to make only commercially-accessible music, they could easily do so.

Mush-room is positioned, then, at the commercial end of the spectrum that is the Residents catalog, but those unfamiliar with said catalog should note that “commercial” is used on a sliding scale here. While Mush-room won’t scare (all) your guests away, it certainly ain’t pop. Nor does it wish to be.

The album’s packaging gives away little about the overall production; other than a couple of photos that suggest it’s both beautiful and grotesque, we know little about what the Mush-room stage presentation might be like. Any other approach, of course, would be inconsistent with what we’ve come to expect from the originators of the Theory of Obscurity.

You may also enjoy more Residents coverage on Musoscribe.