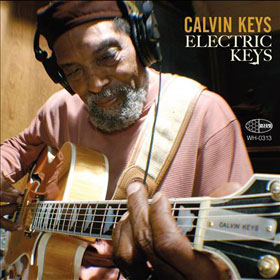 Soul jazz is alive and well. With a sound that updates Wes Montgomery‘s fluid lines and combines that style with a head-nodding groove that will be familiar to fans of boogaloo revivalists such as The New Mastersounds and Soulive, Keys is in fact the real deal. Having cut his teeth as an able sideman to the likes of Ahmad Jamal and Jimmy Smith, Keys’ career releasing albums under his own name only began in earnest relatively recently; though 1997’s Standard Keys was his fifth album, the previous four were released across a span of some sixteen years.

On Electric Keys, he’s backed by an able ensemble that bills itself elsewhere as The Wide Hive Players. Keys shares songwriting duties with his band mates, as well, but as is so often the case with jazz, the compositions are often frameworks – albeit tasty, inventive ones – for solo excursions. The warm, intimate ambience of the ten songs on Electric Keys is a constant, though the tunes themselves are varied lot. Melody is to the fore on tracks like “Love and Innocence,” wherein the horn charts sustain enough interest to carry the song. Keys’ sinewy guitar simply makes it even better.

When the group gets down to some funkiness (as on “Backyard”) it’s thanks in no small part to the hard-hitting drum work of either Thomas McCree or Josh Jones (the credits don’t make it clear who’s on which track). The band walks the fine line between complicated melody and straight-ahead funk, and the results will please aficionados of both approaches. Utility man Matt Montgomery is credited with songwriting, bass, piano and keys.

On the title track, the band plays with a fiery intensity not found elsewhere on this already fine disc; here Keys tears up and down the fretboard while the drummer – again, not sure which one – lays down an insistent, searing groove. The band is firing on all cylinders; those who dig rock but not-so-much jazz may find this the best entry point on the album. Echoes of Hendrix and McLaughlin can be heard, though Keys never loses his identity in the process. On “Telegraph Blues” and “The Hernia,” Keys breathes new life into the well-worn format; while the band does pretty much what you’d expect, Keys’ jazz-inflected runs expand the dimensions of the form. Best of all, with each at under four minutes, the tracks make sure not to wear out their welcome.

On “Senior Moment,” the horns go all exploratory, and Keys heads down the same knotty path. But the funky foundation – drums plus Montgomery’s assured bass – anchors it all in accessible territory. The disc wraps up with “Touch,” a gentle and beautiful solo spot from the guitarist.

Expertly fronted by Calvin Keys, these guys bring the boogaloo on Electric Keys, and never let it go. Recommended.