Today is my birthday. My 50th, in fact. So I’m kinda taking the day off. But still have something to share: recently I penned a news item/feature for Asheville’s altweekly Mountain Xpress, covering a new CD and DVD release by local artist Pierce Edens. So with the print edition’s two-week embargo now ended, here’s a slightly edited version of that story, plus an additional sidebar I wrote. — bk. 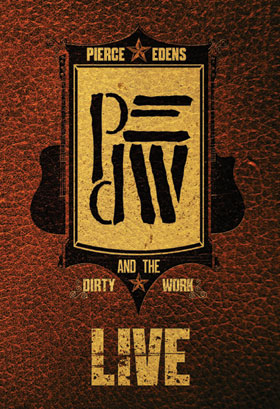 Perhaps it’s paradoxical to suggest that the best way to capture a rough and tumble, unvarnished musical performance is through use of high definition cameras, but that was exactly the approach taken on Pierce Edens and the Dirty Work‘s upcoming LIVE. “We got to make something like the live show that you can also take home when the lights go down,” says Edens. Two Asheville events in November – an advance screening and release party –  celebrated the release of the new DVD and its companion audio CD. Recorded over two nights in front of an appreciative audience at The Lexington Avenue Brewery in Downtown Asheville, LIVE presents the rootsy Edens and his band at their best.

That best really is tough to pin down: Allmusic.com classifies Edens alternately as folk-rock and psychedelic/ garage. But his music can just easily – and accurately – be tagged with the singer/songwriter label; he’s a gritty troubadour who takes what he needs from each style, blending and bending it to suit the needs of his songs.

Raised on a steady diet of mountain music, Edens discovered punk in his teens; his original story-songs are a compelling synthesis of both styles. The mysterious and ominous strains of “Jailhouse” that kick off the show display all of Edens’ best qualities: raspy, hoary vocals coupled with muscular backing that has all the power of rock’n’roll while hewing mostly to the Americana side of the tracks. Stinging slide guitar leavens the acoustic underpinning of many of the tunes. 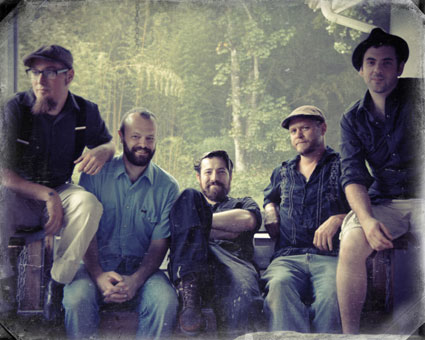 The careening, high-speed romp of “Pretty” is reminiscent of Elvis Presley‘s “Mystery Train” by way of Johnny Cash, imbued with the smoky barroom aesthetic of Tom Waits. Elsewhere, the searing bluesy ballad of “Good Man” shows the stylistic range of the group, with Matt Smith‘s extended lead guitar break featuring sheets of feedback that recall Neil Young at his most metallic.

A longtime fixture of the music scene, Edens has previously released two discs under his own name: 2004’s Four Songs EP and a full-length self-titled album in 2012. The latter was fan-financed via a Kickstarter program which raised 130% of the set goal within 45 days.

Concurrent with his solo work, Edens launched The Dirty Work, featuring Smith on electric guitar and pedal steel, Jesse James Hongisto on bass fiddle, drummer Dane Rand, and Jim Aaron on harmonica. The group has released a pair of studio albums, 2006’s Party Dress and Long Days Above Ground in 2009. For the performances that made up the LIVE CD and DVD, they were joined by saxophonist Jacob Rodriguez and Justin Ray on trumpet.

The LIVE set draws from all four previous releases, recasting some of Edens’ simpler arrangements in a full band style. The close-in, intimate ambience of The LAB’s stone-walled backroom music space, coupled with deft (and hi-def) multiple camera production gives the concert DVD the perfect balance of high-end and down-and-dirty. Pierce Edens says that recording allowed for a display of “the difference between a studio album and live music; this was a chance to get back into the stomping, sweaty grind that our live show can be…including that element of chaos that makes live music so special.” The LIVE CD contains thirteen tracks from the Winter 2012 shows; the DVD adds special features and solo performances of Edens originals “Queen of Hearts” and “Train Tracks.”

Produced by local media production company Sound Lab Studios, the LIVE DVD will be released nationally on December 10. But a pair of events celebrating the release gave fans in WNC two chances to preview what’s in store. On Thursday November 21, the DVD got an advance screening at the Fine Arts Theater downtown. And the next night (Friday the 22nd) Pierce Edens and the Dirty Work performed a release party at The Isis Music Hall in West Asheville. 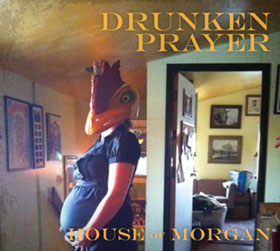 Drunken Prayer — House of Morgan
Like many esteemed musicians before him – Declan MacManus springs immediately to mind – Morgan Geer (formerly of Asheville’s fondly-remembered The Unholy Trio) plys his musical trade using a nom de musc; in his case, it’s Drunken Prayer. The Portland/Asheville artist – who argues convincingly that he’s “not trying to be neo or alt or Americana but let out a howl informed by living life and soaking up American music from slave tunes to psychedelia to street parades” – released his third album, House of Morgan this month.

This time employing a more stripped-down approach than was used on 2012’s Into the Missionfield, Geer cut House of Morgan at home on a vintage cassette four-track (with some assist from computer software). But despite the bare-bones approach – Geer plays and sings all the sounds on the record – the sonic thread that runs through his earlier efforts remains unbroken. Listeners will hear strains of soul, funk, garage, blues, and roadhouse country. But they’re all deftly woven together by Geer’s unique sensibility. House of Morgan is out November 19 on Portland-based Fluff and Gravy Records.