Bill Kopp: I’ve read a lot of Jeff Tamarkin‘s work, and I’ve had a long conversation with you. So one of the things that impressed me about Shell Shocked is how perfectly it reflects what I expect to be your “voice.” He’s essentially invisible, which I’m sure was the plan. Can you tell me a little bit about working with him, and what his role was? 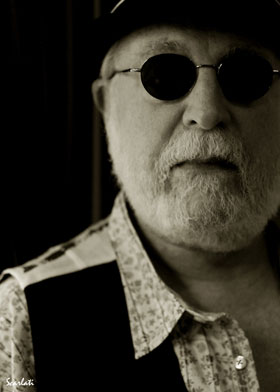 Howard Kaylan: Jeff did the index. A Herculean task; I would have never been able to do that.

And he was valuable. I didn’t have an agent; he did all that kind of stuff. And even more importantly, I knew he was the guy. I knew when I first spoke to him. This really got started about a year and a half ago or more. He did a sort of update interview with me for MOJO. A column and a half or something. And at the time we did the interview, he said, “Wow, you’ve got a zillion of these stories. Jeez; you ought to write a book.” And I said, “Funny you should mention it.” because I had written four chapters about a year and a half earlier, and I just put ’em away. Because even though I was encouraged early on – by an agent, Paula Guran, and a client of hers, a sci-fi writer by the name of John Shirley, one of the original cyberpunks – I started to write it as a how-to. Or a how-not-to. It was originally called How Not to Be Me. And after writing about four chapters of that, it was like writing a punk rock album: “Those days are gone; I have no business doing this. I have nothing to protest.” I had no more business dispensing advice than other people do. Preaching is just not in my wheelhouse.

So I put the thing on the shelf. But I told Tamarkin that I had done exactly that, and he said, “Well, that’s interesting as hell.” And I told him the reasons I didn’t complete it: (a) I’m really a procrastinator. And (b) I need to get paid.

This is a business where everybody does stuff on the back-end, and never gets paid for anything. And I knew better, after having written My Dinner With Jimi. I knew better because working with Harold Bronson – after we had the initial indie 30-minute film that was just the dinner portion – I knew what that was gonna be like. And I was right, all down the line.

So I told Jeff that what I really needed was a swift kick in the butt every now and then. And a check and a deadline usually meant that. And he said, “Well, I’ll do it.” And I said, “Okay!”

And there wasn’t anybody more suited to it. Because I know a lot of writer guys. Tamarkin was the guy; I knew his work. I read the [Jefferson] Airplane book. I knew how well-spoken-of it was in the business. He took fuckin’ five years to write it.

I didn’t have five years. But I knew in that case he had interviewed a thousand people, and in my case – and I stressed this the first time I talked to him – he wouldn’t be interviewing anybody. The only person he’d have to deal with is me. And I didn’t want to do it like an interview; I didn’t want to answer questions. I didn’t want to speak it into a recorder, or dictate it into a software program. The only way I could do this – in my own fucking voice – was to put a blank page in front of me. And by the time the signal got from my brain to my fingers, my self-editor would have known exactly what to do.

Because I am a raconteur; I know these stories backward and forward. They are my life. They are all these episodes; my life still works in episodes. I still see things that way, in chapters.

So when I would go out on the road in the summer, I would write a chapter or two a night. Mark [Volman] drove through the night, and we’d listen to Frank Sinatra on Sirius 71. I would write chapters in the dark, on an iPad. I would send them to Jeff, and he would ask me dumb things, like, “Are you sure the name is spelled like that?” And he’d correct me on things that I was really wrong about: “You didn’t leave Toledo on a Friday night, because you played a show. You had to have left on a Saturday.” And if I ever got contentious about it, I would go into daily diaries, which I have kept since 1968. And Jeff would go to his two unrelated sources to corroborate things. He refused to put his name on anything that wasn’t checked and double-checked. And I needed somebody to pull things together, to make sure it was in the correct form.

I turned the thing in when the tour ended, and that’s kind of when his work started. Dotting the i’s and crossing the t’s, as he says, but it’s really a whole lot more than that. And when the publisher threw the index [project] on him…there should have been some sort of Congressional Medal of Honor for that!

BK: Immediately after I finished reading Shell Shocked, I read something called Louder than Hell: The Defintive Oral History of Heavy Metal. It’s an interesting study in contrasts, having just read your book. Both books are full of unflinching, unvarnished, unapologetic tales of sex and drugs, but you’re likeable and for the most part those characters are not. Why do you think that might be?

HK: Hey, man. I never said I was likeable. I keep reminding people reading this book, as I rediscovered myself, what an asshole I was. A total dick.

Maybe everybody made those mistakes growing up. But when you realize it, if you don’t cop to it, then you’re really a jerk. And you’re writing some kind of lie.

I’d like to think everybody writes like that; I would like to think I’m really reading Keith [Richards] when I read things I know his co-writer said. It was done so brilliantly in that case; the guy got his voice and his rhythm…it was such a beautiful job that I didn’t care.