Funny You Should Mention It: Howard Kaylan’s Shell Shocked (Part One)

Autobiography or no, Howard Kaylan is an engaging, colorful character. His life story is full of highs and lows, but his highs and lows were set against the backdrop of being on one of the 1960s more popular bands (The Turtles) and then as part of the mad ensemble known as Frank Zappa‘s Mothers. In the 70s with his musical partner Mark Volman, he made a series of subversively wonderful albums as Flo and Eddie. And his activities before, after, between and behind those mileposts are all fascinating as well.

Kaylan put pen to paper a number of years ago and wrote the screenplay for what would become My Dinner with Jimi, a delightful slice-of-60s film that got critical kudos but didn’t do boffo box office. That experience taught Kaylan a few things, but the best thing (for us fans) that he learned was that a full autobiography would be well-received. And so with renowned music journalist Jeff Tamarkin (Got a Revolution: The Turbulent Flight of Jefferson Airplane), he wrote Shell Shocked: My Life with the Turtles, Flo & Eddie, and Frank Zappa, etc… I spoke with him about the book.

Howard Kaylan: Have you read it?

Bill Kopp: Of course I have! I wouldn’t waste your time if I hadn’t. 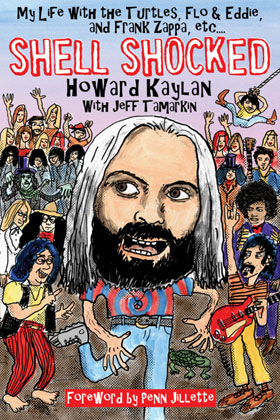 BK: I’ve read a number of musician memoirs, and quite a few of them seem to have an agenda of some kind. Either they’re some sort of therapy – a kind of get-it-all-out catharsis – or they’re an opportunity to settle scores. Shell Shocked is neither of these. Your goal seems to be nothing more than to tell your story, and – if I might say so – to entertain. Do you think that’s an accurate perspective?

HK: Yes…but (he said hesitantly). When you put all of those things together, I think my perspective is based on “yes, I want to tell the truth.” But is there vengeance in it? Hopefully not maliciously, but there’s vengeance in truth, sometimes, when you call people out for things they’ve done. People have assigned that trait to a book – of being malicious – when [the author is] just trying to, as you say, set the record straight.

It encompasses so many of those things, as well as getting it off my chest. But it is therapeutic. That having been said, it opened up a lot of dark doors. And I had a choice; I’m still at that crossroads. You can either close the door and back away and go [cackling laugh] like Danny Kaye or something. Or you can remember what you saw behind the door, and – even all these years later – try to address it.

So to that end, yeah, I’m in therapy here. But I think it’s a good thing. I don’t think you could interact with as many people as I have over the years and not throw yourself into a situation where you either have huge regrets, or where the people have come back into your life and turned the tables on you.

BK: I mentioned score-settling. When you and I spoke several years ago, we talked a little bit about Ted Feigin and White Whale. Knowing what I know about that story, and based on your comments then, I might have expected you to paint a more negative portrait of him in the book. But you didn’t. I’m not saying you pulled punches, but you maybe didn’t exploit opportunities to go for the throat.

HK: You know why? I think I realized – once the pot smoke cleared a little bit – that yes, they were thieves and probably [connected with the] mob, all those things. But…they were so bad at it that you’ve gotta give ’em their props. They were that bad at it to have a hit record right out of the box! And then keep it going, somehow, for five and a half years.

Nino Tempo and April Stevens helped. Or maybe Kenny O’Dell. But basically it was us [The Turtles] for five and a half years. And yet as much as they took, we were always – as I say in the book – “the boys” to them. So as much as they always thought we were the naïve little punks who’d never discover what they did, there was a certain fatherliness there, I think. I don’t know; maybe I just needed that so badly that I projected it onto a lot of people. But they were among the people who sort of became parental to us. Because we had nobody that could rein us in.

All the managers that we had were crooked, and we busted ’em for it constantly. And even though we tried to get out of our White Whale contract several different times, we managed to stick with them even when we could’ve gone elsewhere.