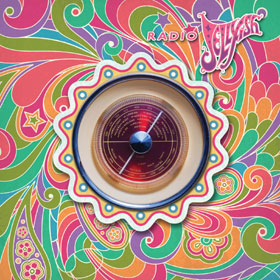 It’s pointless (not to mention plain wrong) to argue against the assertion that the “unplugged” concept had played itself out by the middle of the 1990s. But the format – originally devised (with others) by Jules Shear – was itself a good one: stripped-down, intimate live performances of rock songs. That concept was oft-abused and just plain overused, and the resulting product often added little to listeners’ understanding and appreciation of the music.

But there were exceptions. And though baroque/powerpop act Jellyfish never in fact appeared on the television program MTV Unplugged, they would make use of the presentation style in a few radio performances during their time together.

In many ways, Jellyfish were perfectly suited for the unplugged format. Most who had heard the finely-wrought arrangements on their pair of studio albums (Bellybutton in 1990 and Spilt Milk in 1993) could be forgiven for thinking that the band were a bunch of studio rats a la Steely Dan or Alan Parsons Project, and that those intricate (but not-quite-fussy) arrangements could never be successfully translated to a live setting (see: Queen Live Killers). But that was not the case: the band’s co-leaders Andy Sturmer and Roger Manning were dynamic and spot-on during the band’s relatively few live shows.

And so it was in 1993 that Jellyfish found themselves doing a number of unplugged-style radio dates. Tracks from two of these, in Holland and Australia, make up the new ten-track Radio Jellyfish. And in addition to proving that they could play the songs live in the unplugged format, Jellyfish illustrated just how strong the tunes themselves were (and remain).

Running through an essentially best-of list of tracks from the two albums, the band also served up a pair of ace covers. The Move‘s “I Can Hear the Grass Grow” is no easy tune to cover; not only does Jellyfish nail it, they reinvent the tail-end of the song, effectively making it their own. And even without thunderous bass lines and electric guitars, the song remains powerful, if a bit less psychedelic than the original version.

Newcomer and former Producers bassist Tim Smith plays acoustic guitar on the set, as does  Eric Dover, who had replaced the departed Chris Manning*.  Sturmer – normally the band’s drummer – sticks to vocals here, while Manning plays mostly acoustic percussion (instead of his customary bank of keyboards). But again: even without the electronics, the band shines. Badfinger‘s “No Matter What” was a highlight of the band’s live shows, and it too is delivered in spirited fashion on Radio Jellyfish.

Only the Move cover tune has been released before; as a teaser of what the band could do acoustically, it was a highlight of the 4CD (out of print and hard to obtain) Fan Club set from years ago. The remainder of these tracks are appearing on CD (and vinyl!) for the first time when this set hits the street on December 10.

It would have been nicer if the set had gone on a bit longer: at ten tracks, Radio Jellyfish is a bit on the short side. But with a catalog that initially counted a mere two albums, the latter-day Jellyfish post-breakup releases are to be treasured…no matter what.

* My apologies for initially getting this wrong. — bk